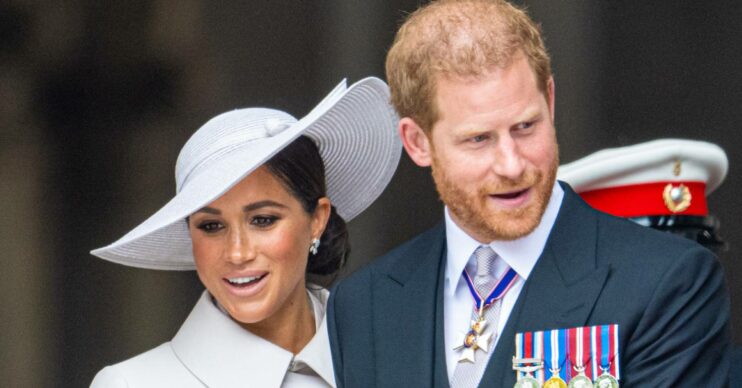 An awkward moment with Meghan Markle and Prince Harry allegedly occurred at the Queen‘s Platinum Jubilee, according to the latest news reports.

Back in June, Meghan and Prince Harry returned to the UK to celebrate the Queen’s 70-year reign.

However, Tom Bower claims that there was behind-the-scenes drama around seating.

Mr Bower is, of course, the author of Revenge: Meghan, Harry and the War Between the Windsors.

The couple sat next to Prince Harry’s cousin Princess Eugenie and her husband Jack Brooksbank.

However, they weren’t near Prince Charles, Camilla, Prince William or Kate.

Mr Bower alleged to the Mirror’s Pod Save the Queen podcast: “And then as they walked down the aisle, they get to the seats in the row they are assigned and I’m told they then asked six other people sitting this side of the aisle could they move down so they could sit on the aisle itself.

“And the usher apparently said to them: ‘You can’t, you’re sitting in seats eight or nine’ or whatever it was and Harry said: ‘Why?’

“And the usher said: ‘That’s what your grandmother ordered.’ I’m told that from a military man.”

Elsewhere, only senior members of the family stood on the Buckingham Palace balcony during Trooping the Colour.

Meghan and Harry announced they were stepping down as senior members in January 2020.

Last year, they then resigned from all royal duties.

Buckingham Palace said at the time: “The Duke and Duchess of Sussex have confirmed to Her Majesty The Queen that they will not be returning as working members of The Royal Family.

“Following conversations with The Duke, The Queen has written confirming that in stepping away from the work of The Royal Family it is not possible to continue with the responsibilities and duties that come with a life of public service.”

The Sussexes then did an interview with Oprah explaining the challenges they faced in the palace.