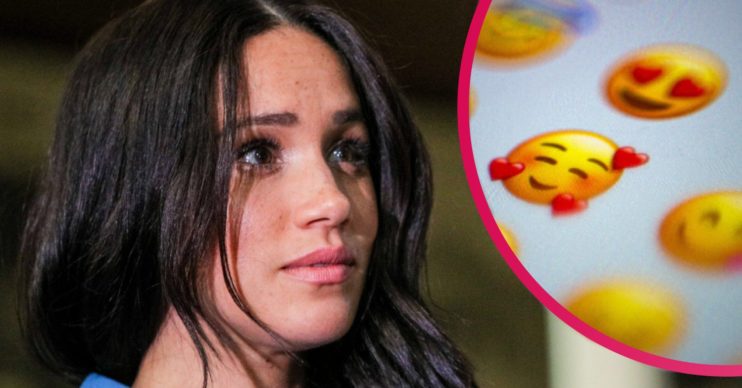 Meghan Markle reportedly fell out with a British pal over a WhatsApp emoji debacle.

The Duchess of Sussex, 39, was apparently told she uses too many emojis via a voicenote on the messaging platform – and it left her friend “mortified”.

Her pal supposedly said that Meghan was annoying for using too many emojis in her messages.

Who sent Meghan a voice note by accident?

However, this voice note was meant for someone else – and they sent it to Meghan by mistake.

Charlotte Griffiths wrote in the Mail on Sunday: “While I can’t disclose the name of this friend, I do hear that the person is mortified over the incident.

Read more: Lisa Riley fears she will die young like her mother

“After all, it’s hard to claim someone else has played a prank when it is so obviously your voice on the recording.

“Needless to say, the incident has allegedly soured relations with the Duchess, and I have been told that the pair have drifted apart.”

Meanwhile, Meghan has been reported elsewhere to be a big fan of emojis.

What are Meghan Markle and Prince Harry’s favourite emojis?

Edward said their exchanges were ’emoji-filled’ when they brainstormed ideas for their famed September 2019 issue.

What’s more, Meghan was apparently initially charmed by Prince Harry‘s use of emojis.

The authors of the book Finding Freedom claim that in their early dating days, Harry repeatedly used the ghost emoji.

Despite being unsure of its meaning, the then-actress is said to have found them delightful.

Omid Scobie and Carolyn Durand explained: “His messages were often short and full of emojis, in particular the ghost emoji, which he often used instead of a smiley face.

“For what reason? Nobody knows. But Meghan found his texting etiquette funny and adorable, just like the prince.”

Back in 2016, Meghan divulged her favourite emojis.

Speaking to Good Housekeeping, she said: “When it comes to emojis and emoticons, I have a serious problem with the chick and the red dress.

“I like the unexpected as well. The panda I use a lot, but that was my high school mascot.”

In the same interview, Meghan spoke of her fondness for cooking roast chicken.

She said: “There is nothing as delicious (or as impressive) as a perfectly roasted chicken. If you have an Ina Garten–level roasted-chicken recipe, it’s a game changer.

“I bring that to dinner parties and make a lot of friends.”

In fact, Meghan said she was cooking roast chicken when Harry proposed.