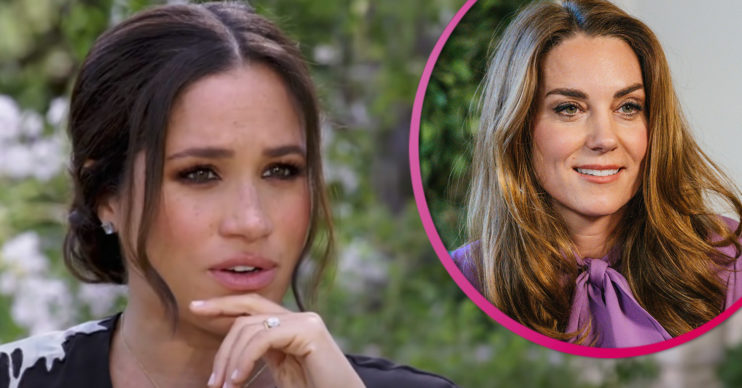 Meghan addressed the reports during her Oprah interview

In latest Meghan Markle news, the Duchess reportedly emailed a Palace aide to ask if they could “set the record straight” on reports she made Kate Middleton cry.

The Duchess of Sussex addressed the rumours in her Oprah interview, claiming Kate made her cry in the run-up to her wedding to Prince Harry.

However, she said she’s forgiven the Duchess of Cambridge after she apologised.

Months after Meghan and Harry’s wedding, the reports emerged claiming Meghan made her sister-in-law cry over bridesmaid dress fittings.

Read more: Harry and Meghan interview: Queen ‘to reach out to couple for peace talks’

It came after Harry was reportedly asked to co-sign a statement denying reports Prince William “constantly bullied” the couple before Megxit.

The alleged email read: “Well, if we’re just throwing any statement out there now, then perhaps KP can finally set the record straight about me [not making Kate cry].”

However, according to Mr Scobie, her email reportedly became ignored.

She was told the Duchess of Cambridge “should never be dragged into idle gossip”.

Ent Daily has contacted reps for Meghan and Kensington Palace for comment.

During her Oprah interview, Meghan addressed the rumours surrounding herself and Kate.

Meghan told Oprah: “The reverse happened. And I don’t say that to be disparaging to anyone, because it was a really hard week of the wedding.

What did Meghan say about the reports?

“She was upset about something, but she owned it, and she apologised.

“And she brought me flowers and a note, apologising.”

In addition, she said: “And she did what I would do if I knew that I hurt someone, right, to just take accountability for it.

“A few days before the wedding, she was upset about something pertaining.

“Yes, the issue was correct – about flower girl dresses.

“And it made me cry, and it really hurt my feelings.”