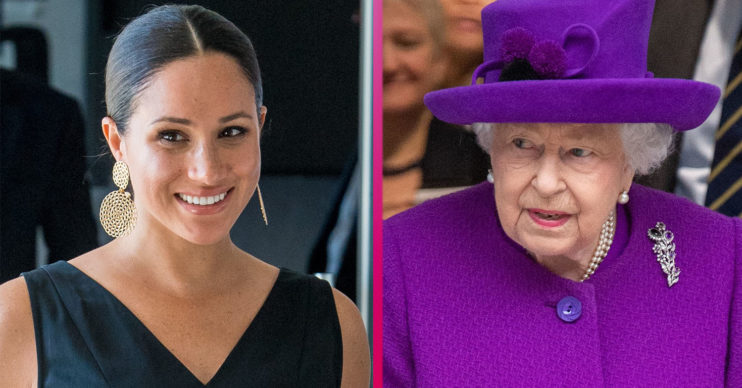 In latest Meghan Markle news, the Duchess reportedly spoke with the Queen before the funeral of Prince Philip.

The Duchess of Sussex, 39, wasn’t able to attend the funeral last weekend after reportedly being advised against travelling since she’s heavily pregnant.

However, it seems Meghan still wanted to send her support to Her Majesty and phoned her alongside son Archie.

Meghan’s husband Prince Harry recently returned home to California after attending the funeral in the UK.

A source told PEOPLE that Meghan spoke to Harry before the funeral as well as the Queen.

The insider said: “Meghan spoke with Harry before his grandfather’s funeral.

“Meghan and Archie also spoke with the Queen earlier this week.”

According to reports, Meghan watched the funeral on TV at her home in California.

She also sent a handwritten note and a wreath to the funeral to pay tribute to the Duke of Edinburgh.

Meghan and Harry hand-selected flowers for the wreath.

Meanwhile, Harry reportedly met with his grandmother privately a couple of times during his UK visit.

Harry’s ‘private meetings’ with the Queen

In an article for Bazaar.com, Omid Scobie – a friend of the Sussexes – reported that a source claimed: “The love and respect he has for his grandmother will always be unwavering.

“This trip was to honour the life of his grandfather and support his grandmother and relatives. It was very much a family-focused period of time.”

It’s claimed Harry also had talks with his father Prince Charles and brother Prince William amid rumours of a rift.

However, it apparently became worse after Harry and Meghan’s explosive Oprah interview.

Read more: Prince Harry ‘misses the Queen’s 95th birthday as he returns to US’

The couple made a series of bombshell revelations and allegations about the royals in the chat, which the Palace said it would be investigating privately.