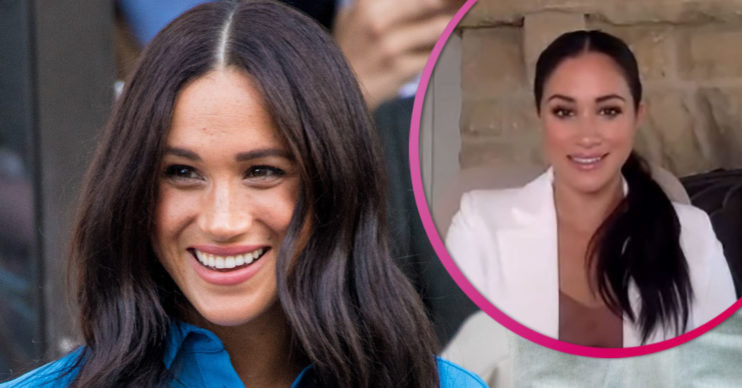 Meghan, Prince Harry and son Archie are living in California

Meghan Markle has given fans a glimpse into her new California home in a recent video chat.

The Duchess of Sussex spoke to Smart Works clients via video call to mark one year since the charity announced the launch of The Smart Set Capsule Collection.

During the chat, Meghan treated fans to a sneak peek of her new home which she shares with Prince Harry and son Archie.

The family recently bought a £11 million mansion in Montecito, California.

In the video chat, Meghan sat in front of a stunning fireplace which featured some artwork, a plant and light.

The mum-of-one looked glowing with her hair tied back in a ponytail as she sported a white blazer.

Meghan sat down to speak to Karla, Charlene and Agnieszka, three previous clients.

They discussed how their time at Smart Works has helped change their lives.

What did Meghan Markle say during the chat?

Meghan told the group: “People can say that so much of Smart Works is about the clothes themselves but it’s really not.

“All of that stuff is the exterior but it’s what it does for you on the inside that ends up being the best accessory.

All of that stuff is the exterior but it’s what it does for you on the inside that ends up being the best accessory.

“It’s the confidence, it’s what is built within, that is the piece that you walk out of that room with and walk into the interview with.”

Meghan took a break from mummy duties to appear on the video call this week.

The former actress, her husband Harry and their one-year-old son Archie moved to America earlier this year.

However, they reportedly purchased their own family home over the summer.

Located just under 100 miles from Los Angeles, it is a hotspot for billionaires and A-list celebrities.

The stunning home is over 14,500 square feet and features nine bedrooms and 16 bathrooms.

Read more: Prince Harry and Meghan Markle ‘shopped around’ in lead up to £112 million Netflix deal

The couple recently announced they’ve signed a Netflix deal after stepping back from royal life.

Meghan and Harry said they aim to create content of ‘hope’ that will inspire future generations.

The deal is reportedly worth around £112million and they’ve since repaid the £2.4 million spent on Frogmore Cottage.