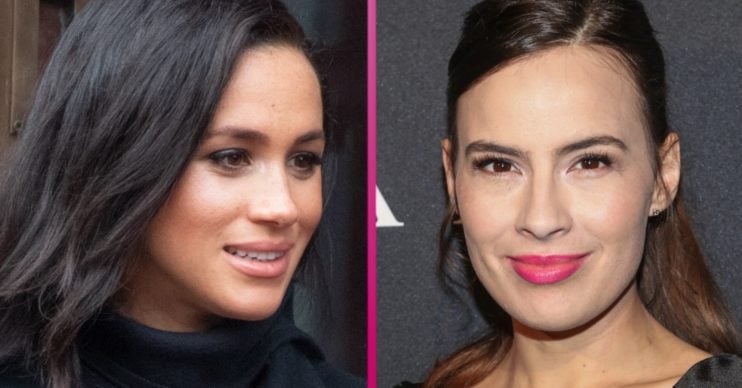 Meghan Markle is experiencing an intolerable level of “intrusion”, according to Sophie Winkleman, the latest star to comment on the Sussexes.

Sophie, who is presenter Claudia Winkleman‘s half-sister, spoke about the couple in a recent interview and admitted she wouldn’t be able to “cope” with that kind of life.

The actress, 40, is married to Lord Frederick Windsor, 41, who is first cousin once removed of the Queen and 51st in line to the throne.

In a chat with Insider, Sophie said she didn’t think her own position was comparable to Meghan’s.

Read more: Prince Harry and Meghan to stay in US for ‘some time’ and avoid ‘pariah-like’ return to England

She told the publication: “I don’t think you can compare us. She’s on a humongous, mega, global scale, and that would be my idea of complete hell.

“But I wouldn’t be able to cope with that level of intrusion for one minute.”

Sophie stays away from social media

The star went on to explain how she likes to keep things private by staying away from social media.

She’s on a humongous, mega, global scale, and that would be my idea of complete hell.

It follows reports royal fans are getting a new tell-all biography about the Duchess of Sussex.

Celebrity biographer Tom Bower is reportedly working on a new book about Meghan’s life and plans to spend 12 months collecting research for it, including via interviews with the royal’s friends and associates.

A source quoted by The Sun claimed Meghan “wants no part” in the biography.

They told the newspaper: “This is the book Meghan will be dreading.

“Tom has previously worked with some of his subjects, and even spent time trailing them. But it has been made perfectly clear to him that this will not be an option with Meghan.”

The source continued: “She wants no part of it. Given the events of recent weeks and months, this book will be dynamite – he reckons this is just the tip of the iceberg, and more will emerge over the next 12 months.”