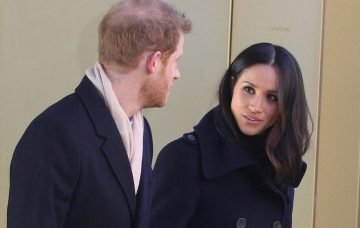 The 73-year-old told TMZ he will remain in hospital for the next few days, seemingly ruling out any possibility he could still make Meghan’s wedding to Prince Harry on Saturday.

Thomas is quoted as saying: “I’m okay. It will take a long time to heal. Staying in the hospital a few more days. Not allowed to get excited.”

The former Hollywood lighting director, who split from Meghan’s mum when she was a child, has said he needed stents in his blood vessels to correct damage caused by an earlier heart attack.

Kensington Palace had previously confirmed Mr Markle would walk Meghan, 36, down the aisle.

But on Monday night, he pulled out of the wedding, amid speculation he’d worked with a photography agency on staged paparazzi pictures.

Kensington Palace reacted with a statement reading: “This is a deeply personal moment for Ms Markle in the days before her wedding.

Then, the following day Mr Markle suggested he’d changed his mind and was keen to walk Meghan down the aisle.

However, it was all change shortly afterwards, with Thomas telling TMZ he would unlikely be able to travel to the UK as he needed to undergo heart surgery.

There has been no comment from Kensington Palace yet on the latest developments.

Meghan and Harry will marry at noon on Saturday at St. George’s Chapel at Windsor Castle.