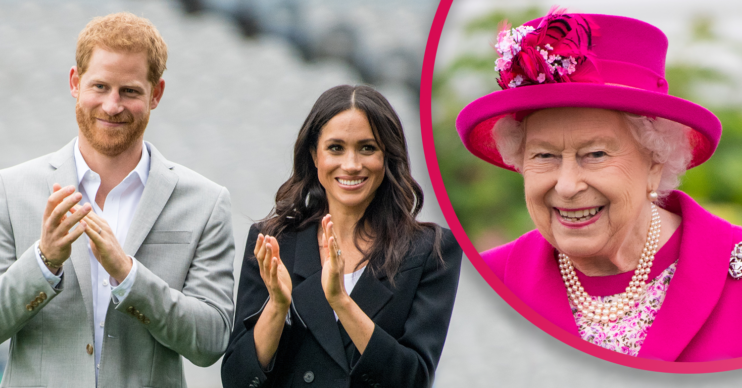 The little girl is due any day now

Meghan Markle could make a “lovely nod” to the queen with her choice of baby name.

The Duchess of Sussex is due to give birth to her second baby, a little girl, any day now.

And insiders suggest that she’ll not only pick husband Prince Harry‘s favourite name for their daughter, but one that pays tribute to the monarch too.

What will Meghan Markle name her baby girl?

Despite the distance between them, it seems Harry and Meghan hold the Queen close to their hearts.

An insider has claimed that the couple are considering honouring the monarch with their choice of baby name.

It’s thought they’re considering calling the tot Lily because of its similarity to the Queen’s nickname Lillibet.

Read more: Meghan and Harry ‘want to be at the Queen’s 2022 Jubilee celebrations’

And Lily just happens to be Prince Harry’s favourite name for a baby girl, too.

It would be a lovely nod to the Queen who was known as Lillibet during her childhood.

An insider told OK!: “It would be a lovely nod to the Queen who was known as Lillibet during her childhood, but it’s also always been one of Harry’s favourite names.”

What other clues point to Lily?

The insider also revealed another clue that could hint at the couple choosing Lily.

They explained that, back in 2019 when the duchess was pregnant with Archie, she and Harry took part in a walkabout in Merseyside.

The insider added: “Someone in the crowd later revealed he’d asked her how she spells her daughter’s name – Lily. He took great interest in it.”

Also, at their 2018 wedding, Harry and Meghan’s bridesmaids wore flower crowns containing lily of the valley.

The suggestion of Lily comes as Philippa has emerged as the bookies’ favourite baby name for the tot with odds of 3/1.

It comes just months after the death of Harry’s grandfather Prince Philip and would be a sweet nod to him.

Other names said to be in the running include Diana at 5/1 and Elizabeth at 10/1.