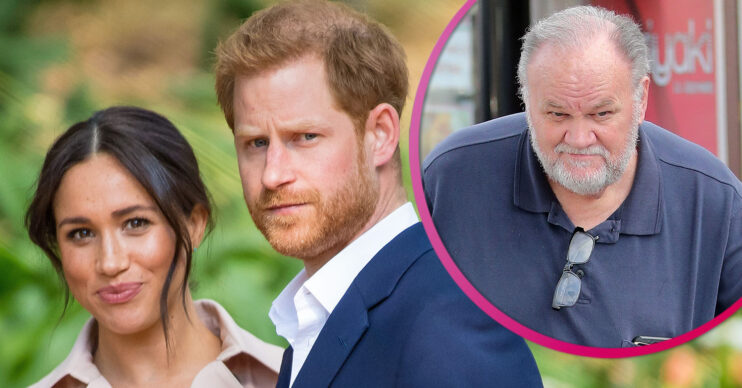 The Duke and Duchess welcomed their daughter on June 4

Meghan Markle has given birth to her second baby and her dad Thomas has broken his silence.

On Sunday (June 6), the Duke and Duchess of Sussex announced they had welcomed their second child – a daughter called Lilibet Diana – on June 4.

Now, Meghan’s estranged father Thomas has said he’s “very pleased” over the arrival of his granddaughter.

What did Thomas Markle say about Meghan and Harry’s baby?

The 76-year-old told The Sun: “I’m very pleased that my daughter and my new granddaughter had a successful delivery.

Thomas hasn’t had contact with his daughter since she married Harry in 2018.

He pulled out of her wedding after suffering a heart attack and had to undergo surgery.

Thomas has publicly reached out to Meghan on several occasions to try and heal their rift. However, there’s been no progress it seems.

Meanwhile, he hasn’t yet met Harry or grandson Archie.

Harry and Meghan are now living in California after stepping back from their senior royal roles last year.

Back in February, they announced they were giving Archie a sibling as Meghan was pregnant with her second child.

Then during their Oprah Winfrey interview in March, the couple revealed they were having a little girl.

In a statement yesterday, the Duke and Duchess confirmed the arrival of Lilibet – aka Lili.

Their website announced: “Lili was born on Friday, June 4 at 11:40 a.m. in the trusted care of the doctors and staff at Santa Barbara Cottage Hospital in Santa Barbara, CA.

“She weighed 7 lbs 11 oz. Both mother and child are healthy and well, and settling in at home.”

Why did Meghan and Harry name their daughter Lilibet?

Meanwhile, they explained Lili is named after her great-grandmother, The Queen, whose family nickname is Lilibet.

Read more: Prince Harry and Meghan Markle ‘want to be at Queen’s Jubilee celebrations in 2022’

In addition, they gave their daughter the middle name Diana in honour of her late grandmother, Princess Diana.

Meanwhile, it’s also reported the name Lili is a nod to Meghan’s mother Doria Ragland as her nickname for Meghan is flower.

What do you think of the name Lilibet? Let us know on our Facebook page @EntertainmentDailyFix.