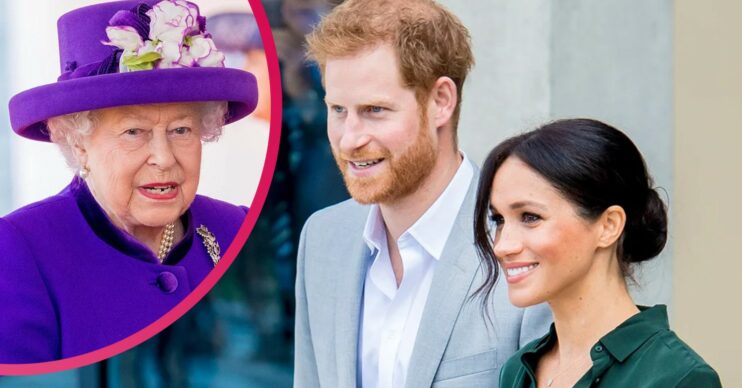 The Queen is yet to meet her great-granddaughter

Meghan Markle and Prince Harry have reportedly requested an important meeting with the Queen.

The pair have apparently offered for the 95-year-old monarch to finally meet her great-granddaughter Lilibet, four months.

It’s believed that Harry is still on good terms with his grandmother, despite his reported feud with some of the Royal family.

According to reports, the pair have asked if they can fly in so Lilibet can meet her.

The meeting will mark Meghan‘s first time back in the UK since stepping down as senior royal.

However, palace staff are said to be ‘shocked’ by their offer.

A source told The Sun: “Harry and Meghan have made this offer but a lot of people are shocked by the sheer nerve of it.

“They may genuinely want to see the Queen but it’s breathtaking given what they’ve put her through this year.

“Her Majesty’s staff have not responded so far. In fact there has also been discussion about Christmas — and whether an invitation should be sent to Harry and Meghan, after they spurned one last year.”

In addition, the insider claims that the Queen “would love” to see the couple’s children, Lilibet and Archie.

The Duke of Sussex is releasing a new book next year about his life.

But according to a royal expert, his family have their concerns.

Royal commentator Charles Rae told Entertainment Daily!: “I am sure the Queen has spoken to Charles and William over the barrage of accusations Harry and Meghan have made.

“They are as concerned as Her Majesty about what the couple have been saying.

In addition, Mr Rae continued: “The royals are concerned that members of the family may have to face further allegations.”

ED! has contacted Meghan and Harry’s representative for comment.