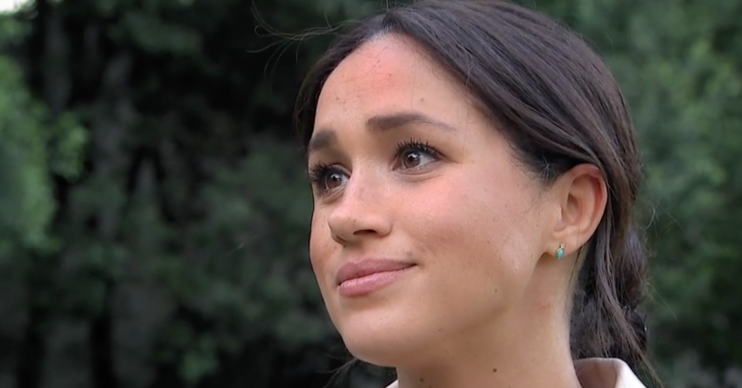 It's been a rough year for the new mum

An emotional Meghan Markle has opened up about life in the spotlight.

Filmed for a new ITV documentary, Harry & Meghan: An African Adventure, Meghan admitted to feeling “vulnerable” during her pregnancy.

She also admitted that she isn’t “okay” and that it has been a “struggle” behind the scenes as she adapts to life as a royal, a mum and a newlywed.

Opening up about the toll life in the spotlight has taken on both herself and her husband Prince Harry, Meghan said: “Look, any woman, especially when they’re pregnant, you’re really vulnerable, so that was made really challenging.”

Read more: Fans joke that Amanda Holden has “a hole” in her dress during red carpet appearance

She added: “And then when you have a newborn, you know, and especially when you’re a woman, it’s a lot.”

During the chat, the Duchess of Sussex can also be seen thanking ITV’s Tom Bradby for asking how she was feeling.

“I guess also thank you for asking, as not many people have asked if I’m okay,” she said.

“But yeah, it’s a very real thing to be going through behind the scenes,” a clearly upset Meghan revealed.

“Not many people have asked if I’m ok … it’s a very real thing to be going through behind the scenes.”

Meghan reveals to ITV’s @tombradby the intense media spotlight has left her struggling to cope while becoming a mum #HarryAndMeghan https://t.co/Uy21iE6ozJ pic.twitter.com/kZqhZV66OL

“And the answer is, would it be fair to say not really okay? Has it really been a struggle?” Bradby asked.

Not many people have asked if I’m okay. But yeah, it’s a very real thing to be going through behind the scenes.

In the documentary, which airs on ITV at 9pm on Sunday October 20, Prince Harry also revealed that he hasn’t ever recovered from his mother’s death in 1997.

During the trip, the couple revealed that they would be taking legal action following press intrusion into Meghan’s relationship with her father Thomas Markle.