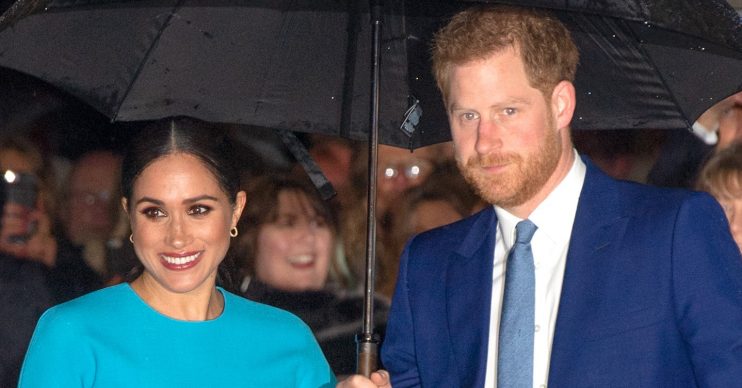 Meghan looked a vision in blue last night as she and Prince Harry attended their first public appearance in the UK together following their exit from the royal family.

The couple beamed in front of cameras as they attended the annual Endeavour Fund Awards at London’s Mansion House on Thursday evening.

The Duke and Duchess braved the rain as they greeted crowds outside the venue.

They received cheers and applause as they walked by, but also one loud boo.

Meghan and Harry were at the awards to honour the achievements of wounded, injured and sick servicemen and women who have taken part in sporting challenges over the last year.

As Meghan presented the Celebrating Excellence Award during the ceremony, she admitted it was “very nice to be back”.

She told the crowd inside the venue: “It’s very nice to be back. It’s the third year I’ve had the incredible fortune of joining my husband here. It’s just the most inspiring space.

“When we were watching the [nomination] videos all the way in Canada we had the same moment of ‘how are you going to choose?’ Well, we’ve done our best.”

The evening event was the couple’s first joint official engagement since announcing their decision to step back from their roles as senior royals.

Their official royal duties will end on March 31 and they will then work to become “financially independent” while splitting their time between the UK and North America.

It’s the third year I’ve had the incredible fortune of joining my husband here.

The couple are set to visit the Royal Albert Hall on March 7 and it’s also been confirmed that Meghan will mark International Women’s Day on March 8, with further details yet to be announced.

The Commonwealth Service on March 9 will be one of Meghan and Harry’s final official engagements.

The service, which will be broadcast live on BBC One and attended by senior members of the royal family, will include a reflection given by international boxing champion and Olympic gold medallist Anthony Joshua, and special musical performances by Alexandra Burke and Craig David.

While Meghan and Harry are busy completing their final engagements in the UK, their 10-month-old son Archie has stayed in Canada.

The couple’s decision to not bring their son was criticised by the Queen’s former press secretary Dickie Arbiter.

Dickie, who was a spokesperson for the Queen from 1988 to 2000, told Nine News Australia: “I’m sorry, there isn’t an excuse for not bringing him.

“It is spiteful, it’s inconsiderate as well, and the Queen is going to be 94 in April, she’s not going to be with us much longer.”