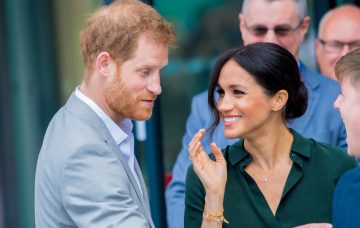 Will they choose a traditional name or something out of the box?

The Duke and Duchess of Sussex have only just announced a baby is on the way but already possible names are being discussed.

Bookies have jumped into action when it comes to what moniker Harry, 34, and Meghan, 37, may choose for their little one – and there are some very familiar choices in the mix!

Read more: Why The Duke and Duchess of Sussex’s baby won’t be a prince or princess

Betfair is touting Diana, Alice and Arthur as the firm favourites, offering odds of 12/1 on each.

Diana would, of course, be a tribute to Harry’s late mother, Princess Diana.

Alice, meanwhile, was the name of Harry’s grandfather The Duke of Edinburgh’s mother, while Arthur has always been a popular name within the royal family.

A spokesperson for Betfair said: “At this stage Diana, Arthur and Alice, which was favourite at different stages for Kate and William’s babies, are the 12/1 front runners. However, with months until the baby is born, those odds will shorten, change and other names will come to the forefront, so watch this space.”

Alexander is at 7/1 while Alice, Elizabeth and Victoria are all at 10/1.

A spokesperson for William Hill said: “We took eight bets in the first minute today and given the popularity of the couple this could be bigger than the original market we had for Prince George.”

Other popular names being touted by the bookies as possibilities include Edward, Alfred, Philip, Henry, Andrew, James, Oliver, Thomas, Albert or Grace.

Many of the current favourites have already been used by Harry’s brother The Duke of Cambridge and his wife, Kate, The Duchess of Cambridge for their three children.

Prince George’s middle names are Alexander and Louis, while Charlotte’s are Elizabeth and Diana and baby Louis’ are Arthur and Charles.