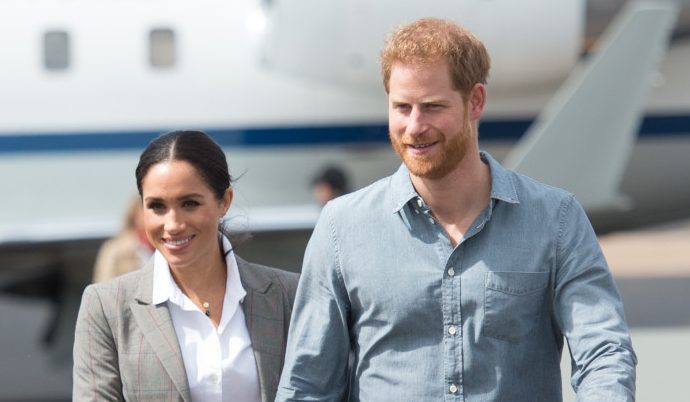 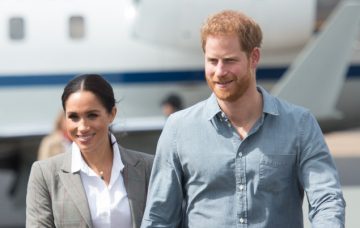 Duke and Duchess of Sussex share touching moment in the rain

The Duke and Duchess of Sussex have melted fans’ hearts by sharing a sweet moment during the second day of their Australian tour.

They arrived in Dubbo, New South Wales on Wednesday, just two days after announcing they are expecting their first child.

Harry, 34, and Meghan, 37, took in a number of engagements in drought-stricken Dubbo, where it poured with rain as they met crowds.

"You are the salt of the earth – honest, hardworking and as tough as they come.

And that resilience, sense of humour and commitment to the land are the qualities that make you unique. You are the backbone of this country." — The Duke of Sussex, in Dubbo #RoyalVisitAustralia pic.twitter.com/LVXnz0m0bj

The heavy downpour led to a touching moment between the royals, however, when Harry stood up at a podium to make a speech and Meghan stood next to him, holding an umbrella over the both of them.

Harry was offered his own umbrella by the town’s mayor before the speech, but replied he didn’t need one, joking: “It’s alright, I’ve got my wife!”

Meghan then assured everyone: “I got it!”

Meghan holding an umbrella to help keep Harry dry was a simple gesture but one that didn’t go unnoticed by the pair’s fans, who took to Twitter to gush about the sweet moment.

Many praised the couple for exuding love and closeness.

Love the way Meghan is looking at Harry when she is holding the umbrella for him. You can really see she loves him and how proud of him she is! ❤️ #RoyalVisitAustralia

Aww just watching Meghan holding umbrella for Harry. The look of love she was giving him melts your 💓 .. morning all x

Awww!!! This is so sweet; Meghan holding Harry’s umbrella for him. Just another reason to love them more. 😍😍💜💜☔️☔️ pic.twitter.com/dGTpeb3DZd

There’s a video of Meghan and Harry in the rain today where he goes, “don’t worry, I’ve got my wife” when he is being offered an umbrella and Meghan goes, “I got this” and proceeds to hold the umbrella for him while he gives his speech. This is is a Meghan Markle fan account now.

Meghan holding the umbrella for harry 😭

Meghan is holding the umbrella for Harry. These guys are too much 😍 #Dubbo #RoyalTour

Harry and Meghan began their day in Dubbo by meeting representatives from the Royal Flying Doctor Service, who spoke about their role providing life-saving services for rural regions.

They were then hosted by the Woodley family on their farm, which they’ve been farming for five generations, and Meghan revealed she’d baked a loaf of banana bread during her stay in Sydney the previous day.

At Mountain View Farm The Duke and Duchess met the Woodley Family, who have been running a livestock and crop farm for over five generations since 1887. #RoyalVisitAustralia pic.twitter.com/YLKP6gB7Mt

Her bread was served alongside English tea as they spoke to local farmers about the impact the drought has had on their work.

Other engagements in Dubbo included a (very wet!) picnic in the park where they watched a dance performance and met members of the public.

They finished their day in Dubbo by visiting a local school which works to prove the education outcomes of young Aboriginal and Torres Strait Islanders.

Of course, many people who met the couple were eager to congratulate them on their baby news, and ask Meghan how she is feeling being pregnant while on a gruelling 16-day tour.

At the Woodley farm, Harry and Meghan were seen doting on the family’s 13-month-old daughter Ruby.

Read more: Why the Duke and Duchess of Sussex’s child won’t be a prince or princess

Ruby’s mum Carol told reporters: “Meghan told me that she’s feeling pretty good so far, which is great, and that she’s running on adrenaline.”

Harry and Meghan will fly to Melbourne on Thursday for another jam-packed day of engagements, before taking in further trips across Australia, New Zealand, Fiji and Tonga.

Are you enjoying seeing pics of Meghan and Harry on tour? Leave us a comment on our Facebook page @EntertainmentDailyFix and let us know what you think!