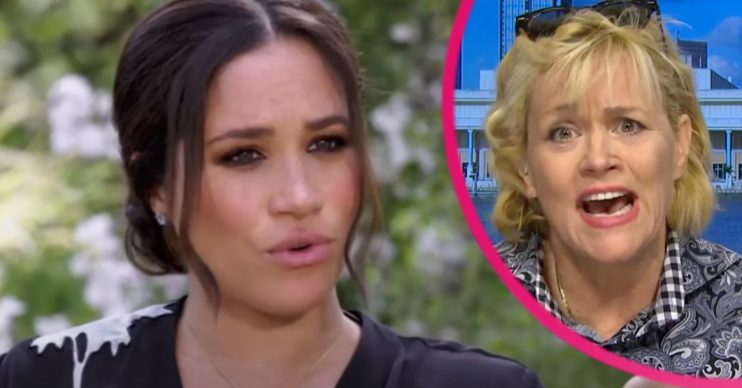 Meghan Markle has been accused of lying by her half-sister Samantha, following her bombshell interview with husband Prince Harry.

The 56-year-old admitted that she has no sympathy for Meghan, 39, who discussed her strained relationship with her family to Oprah Winfrey.

During the interview, the Duchess of Sussex claimed she was “betrayed” by her father and said that Samantha “doesn’t know her”.

Meghan and Harry interview: What did Samantha Markle say?

Addressing Meghan’s claims, Samatha told Inside Edition: “I don’t know how she can say I don’t know her and she was an only child.

“We’ve got photographs over a lifespan of us together.”

In addition, Samatha shared a series of photographs of the pair together – most recently in 2008.

The 56-year-old also slammed the Duchess for suggesting she changed her surname back to Markle, after Meghan struck up a romance with Harry.

During the chat, Samantha insisted Markle had “always been her name”.

She later went on to accuse Meghan of using “depression as an excuse” while opening up to Oprah on her mental struggles.

But while most viewers were saddened by the comments, her half-sister had little sympathy.

Samantha added: “Depression is not an excuse for treating people like dishrags and disposing of them.”

What did the Duchess say about her family?

During the interview, a tearful Meghan admitted she felt “betrayed” by her father’s actions in the past.

She told Oprah: “If were going to use the word betrayal, it’s because when I asked him, when the comms team told us this the story was coming out, we called my dad and I asked him and he said, ‘No, absolutely not.'”

Furthermore, Meghan told her dad: “I just need you to tell me, if you tell me the truth we can help.

“And he didn’t do that, and that for me has really resonated as a mother. And also me saying full stop, if we use this to protect you we won’t be able to protect our grandchildren one day.

“I look at Archie and I can’t imagine doing anything to hurt my child. I can’t reconcile that.”

She said: “The last time I saw her must have been 18, 19 years ago, and before that, ten years before that.

“She changed her last name back to Markle only when I started dating Harry. I think that says enough.”