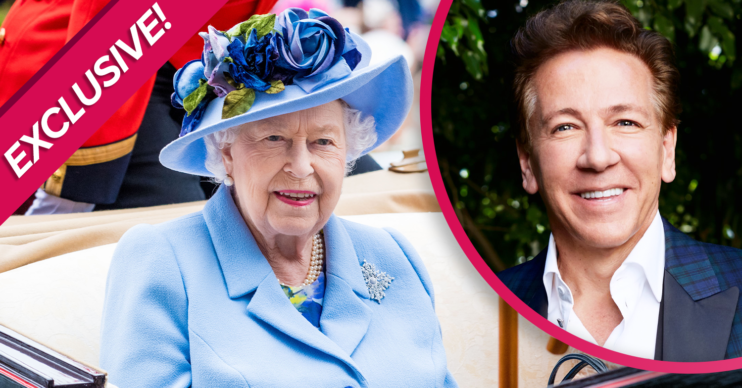 He'd only seen her on a stamp before the investiture

Lorraine star Ross King has revealed he didn’t know whether to shake the Queen’s hand of “lick her face” as he collected his MBE.

Scottish-born Ross – who is the LA correspondent on Lorraine – was given the honour back in 2018 for services to Broadcasting, the Arts and Charity.

And, when he collected the honour from the monarch, he was a bit stumped over what to do.

Ross exclusively told Entertainment Daily that the only time he’d seen Her Majesty before that was on a stamp.

What happened when Lorraine star Ross met the Queen?

“It was amazing,” he revealed of the meeting, which took place during an investiture at the Palace of Holyroodhouse in Edinburgh.

“I would always joke that when I met the Queen I’d only ever seen her on a stamp. So when I met her I didn’t know whether to shake her hand or lick the side of her face,” Ross said.

He quipped: “So that happened, ha ha!”

It was a special moment for Ross, who revealed he was “mystified and stunned” when he discovered he would be receiving an MBE.

“My mum and dad did so much for charity and the community and as a kid I remember it was the Birthday Honours List or the New Year’s Honours List and you wanted to see who was famous on it.

And when she smiles, she’s got that amazing smile. I’ve got that photograph of her smiling.

“Then you would see real people and I used to say: ‘Dad, you should get something,’ and Dad always said: ‘People like us don’t get these things,’ and I took that to heart. I thought he meant people like me,” Ross explained.

“Then, when it came through and it was for broadcasting, the arts and charity, I was mystified and stunned.

“Then to get the Queen and to get it at Holyrood… To go back to Scotland for it was unbelievably special.”

Lorraine star Ross also revealed what happens when you actually meet the Queen.

He said you’re told beforehand there may or may not be a conversation with the monarch.

And, when she puts up her hand, that’s your cue to leave.

Ross’s conversation with the Queen

“It was funny, she said: ‘So how long are you over for and what did you come over for?’ And I said: ‘I came over for this,’ and she was like: ‘Oh, you just came for this?’ I was like: ‘It may be just another day for you ma’am, but for me and the family this is the highlight.'”

Ross continued: “Whether you’re a royalist or whatever your views are, I think most people admire the Queen.

“So as her hand came up, I just said: ‘Ma’am, can I just say thank you to you for ruling over us.’

“For generations, when the Queen goes, we’ve never known anything else. So I got to say thank you to her which very few people get to do.

“And when she smiles, she’s got that amazing smile. I’ve got that photograph of her smiling,” he revealed.

“It’s just, it’s almost like everything is gravy now. If someone had told me where I’d be in my career, where I’d live, the opportunities I’ve got to do, it’s just phenomenal,” Ross added.

“That whole full circle, with the MBE, getting it for broadcasting, the arts and getting it for charity, it’s always been a big thing in my life,” he concluded.

Ross dedicated his MBE to his parents.

Posting to Instagram, he said: “Who’d have thought! For Mum and Dad. MBE for Broadcasting The Arts and Charity.”