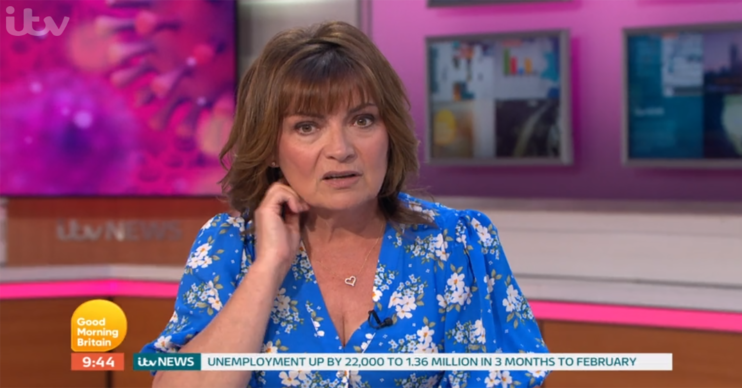 She said they "could have been such an asset"

Lorraine Kelly has given her views on Prince Harry and Meghan Markle – and she didn’t leave any room for doubt.

Presenter Lorraine was discussing the royal couple’s decision to step back from royal life with Dr Hilary Jones, 66.

He’s away from his family and actually, to be honest, they both seem kind of irrelevant.

“They could have been such an asset to the Royal Family, especially now and there they are stuck in La La Land,” Lorraine went on.

“He’s away from his family and actually, to be honest, they both seem kind of irrelevant.”

Prince Harry and Meghan Markle are in quarantine in Los Angeles with their son Archie.

Lorraine added: “Obviously we don’t with them any ill will. I hope they will be happy, it just seems really sad.”

The couple got off lightly with Lorraine compared to her fellow GMB presenter Piers Morgan.

He was scathing about their decision to announce a “zero engagement policy” with tabloid newspapers this week.

He said they shouldn’t have made the announcement in the middle of a global pandemic.

Harry and Meghan reportedly had leaked details of their video call to the Queen to media outlets which they favoured.

However, other Royals have played a key role in comforting the public as the coronavirus pandemic.

Prince Philip, 98, released a rare statement yesterday to praise all the workers fighting on the frontline.

Meanwhile, the Queen gave an inspirational speech earlier this month, urging people to stay at home.

In addition, she reminded the population that “we will meet again,” in an echo of wartime solidarity.

What do you think?  Go to our Facebook page @EntertainmentDailyfix and tell us what you think by leaving a comment.