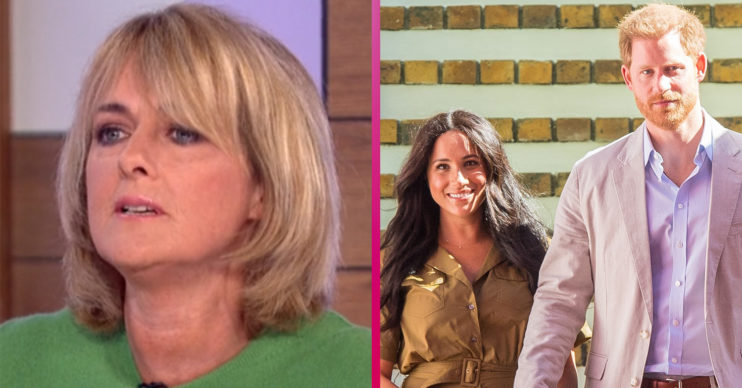 The panellist and writer, 58, said she thought they weren’t deserving of their new Netflix deal.

The former senior royals have just signed a deal to make movies and shows with Netflix.

Jane argued on the ITV panel that she doesn’t believe either are qualified for the role.

Jane Moore is ‘irritated’ by Harry and Meghan’s new deal

She also argued that there are many more talented writers out there that deserve a chance.

Host Charlene White detailed the deal and then asked the panel: “Do they deserve it?”

When probed, she elaborated her stance.

The tabloid journalist said: “It irritates the hell out of me. I’m a writer myself.

Jane thinks there are more deserving writers out there

“I know there are so many writers producers, there is so much young talent out there trying to come through, who would love to get into Netflix’s door – let alone be given this deal.

“They have been given this deal because of who they are, not because what they have proved they can do.”

Jane said she wouldn’t mind the pair gradually building up a portfolio of films and shows.

However, she sees this deal as too much and too soon.

The Netflix deal is worth an incredible £75.2 million

She continued: “I’m all for if, ten years down the line, they have made lots of programmes and come up quietly and got the deal then [that would be different].

“But I think them just parachuting in is not good for the creative industry as a whole, Ryan Murphy has a deal, Shonda Rhimes, these are proven really good creative writers, producers, creators.”

But her co-star Gloria Hunniford said she expected such a deal, and that it makes sense to her.

The telly presenter explained: “I am not surprised at all. Because when you talk about giving hope, I think the 100 million dollars might give Meghan and Harry a bit of hope.

“We knew when they went back to America, that commercialism was coming in. They have to make their money and it was inevitable they were going to make it in some kind of commercial way.

“I disagree with Jane in a way, I understand about new talent but you can’t blame Netflix for getting Harry and Meghan, worldwide that is an immediate attraction.”

Jane then quipped that hopefully Harry and Meghan can use some of their newfound wealth to pay back the British public.

They have previously stated they intend to repay the renovations on their shortly-lived in Frogmore Cottage.

Jane jibed: “And the good news is they can pay back the £2.4 million the British taxpayer gave to use to refurbish the house they no longer live in.”