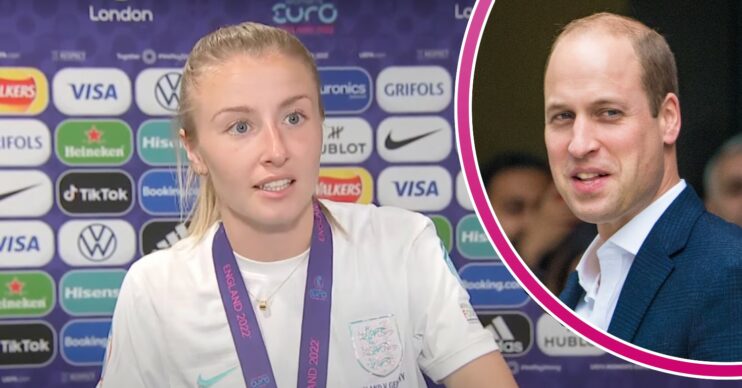 The Lionesses made England proud on Sunday

Now, the 25-year-old has broken her silence behind the touching moment, revealing it was the future king who actually initiated it!

On Sunday, for just the second time ever, a senior England side won a major trophy.

England Women managed to beat Germany in front of a packed Wembley stadium to win Euro 2022 over the weekend – and a certain royal fan couldn’t hide his delight.

Prince William was in attendance at the match and was spotted giving England captain Leah a big hug at full time.

Speaking about the hug, Leah said: “I think I went to shake his hand and he said, ‘Leah, bring it in’ and I said, ‘Thank you, sir’.”

Following the game, Prince William also sent a heartfelt message of congratulations to the Lionesses on Twitter.

“Sensational. An incredible win @lionesses and the whole nation couldn’t be prouder of you all,” he tweeted.

“Wonderful to see history in the making tonight at Wembley, congratulations! W.”

One fan replied: “I just loved the fact that you started shaking hands with the girls then halfway through broke protocol and went full on hugs! Well done!”

“Love how you hugged the players! Shades of your amazing mum there,” another said.

“Absolutely loved that the official protocol was dropped just for a bit to celebrate with the team. Hugs and fist bumps from our future king. Amazing and so personal,” a third wrote.

“Your success goes far beyond the trophy you have so deservedly earned.

“You have all set an example that will be an inspiration for girls and women today, and for future generations.”

🏴󠁧󠁢󠁥󠁮󠁧󠁿 🏆 The Queen has sent a message of congratulations to the @Lionesses:

Prince William wasn’t the only royal to send a message of congratulations to the Lionesses on Sunday.

The Queen herself also sent a message congratulating the girls on their win too.

“My warmest congratulations, and those of my family, go to you all on winning the Women’s European Championships,” she said.

“It is a significant achievement for the entire team, including your support staff.”

She then continued, saying: “The Championships and your performance in them have rightly won praise. However, your success goes far beyond the trophy you have so deservedly earned.”

Reacting to the Queen’s message, Leah said: “I’m a big fan of the royal family so it means a lot.”