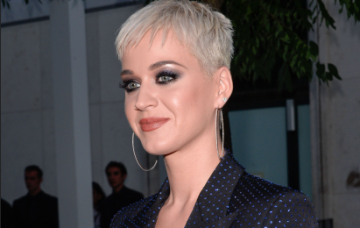 Most would agree that Meghan Markle looked stunning when she tied the knot with Prince Harry on Saturday but one famous face was not impressed.

Speaking to Entertainment Tonight, she said: “I would have done one more fitting.”

The American Idol judge went on to say that she preferred the lace Alexander McQueen dress Kate Middleton chose for her 2011 wedding to Prince Willliam.

She then added to soften the blow that she admires Meghan, 36, and is delighted she’s found her prince.

“I’m so happy for them, and, you know, I don’t know them from Adam, but it’s amazing what she’s doing with all this, her humanitarian efforts.

“The fact that she’s a proud feminist, I love all that. I support her as another woman and love her and wish them both well.”

She then justified her criticism of Meghan’s dress, saying: “I’m never not going to tell the truth! One more fitting, but I love you.”

The newly titled Duchess of Sussex’s dress had been a closely kept secret until the big day with various designers from Victoria Beckham to Ralph & Russo tipped to be working with her on it.

British designer Clare was announced as the brains behind the beautiful gown on Saturday, and she greeted Meghan on the steps of St George’s Chapel on Saturday to ensure any crumples from her car ride to Windsor were eased out.

She also supervised the two page boys who would carry the five metre long veil, made from silk tulle with a trim of hand-embroidered flowers, as the followed the bride up the aisle.

Clare said Meghan was “a joy” to work with on the dress and she was delighted to be a part of history, while helping the bride “look and feel amazing”.

And while Katy may not have been bowled over, Clare was delighted that Meghan’s new husband was.

Prince Harry told Meghan she looked “amazing” as she reached him at the altar, while Clare later revealed their encounter at the reception: “He came straight up to me and he said ‘oh my God, thank you, she looks absolutely stunning’.”

What did you think of Meghan’s wedding dress? Do you agree with Katy Perry’s comments? Leave us a comment on our Facebook page @EntertainmentDailyFix and let us know what you think!