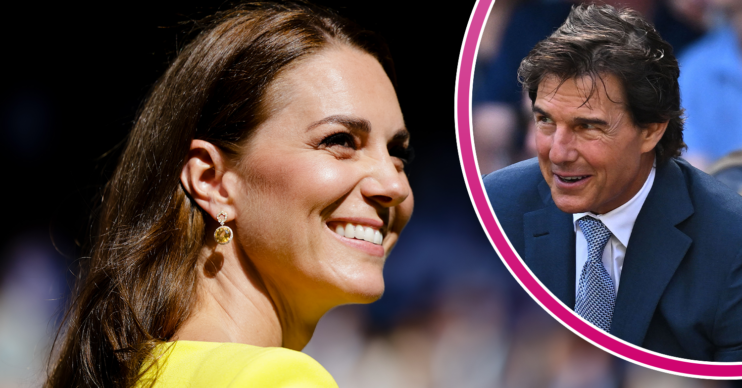 Accused of 'major crushing' on the Duchess of Cambridge

At the premiere, Tom was seen taking Kate’s hand as he helped her up the stairs.

And now royal fans have joked that the Hollywood A-lister appeared to be pretty enamoured with our Duchess of Cambridge.

Tom was sat a couple of rows behind Kate in the Royal Box at the ladies’ singles final yesterday.

She commanded attention in her bright yellow Roksanda dress, with some claiming that they spotted Tom “drooling” at Kate.

However, some did quip that they “couldn’t blame him” because she did look stunning!

Of course, Tom appears to be firm friends with the royals and paid tribute to the Queen at the recent Platinum Jubilee celebrations.

During the tennis, royal fans took to Twitter to joke that Tom appeared “smitten” with Kate.

“I love how #TomCruise is looking at Kate,” said another.

“Wow! He is so eyeing Catherine! She must have really made an impression on him at the Top Gun premiere! He looks smitten!” another claimed.

“Tom drooling all over the Duchess of Cambridge again, but seriously who can blame him,” joked another.

“I think that’s what you call ‘major crushing’ on the Duchess of Cambridge,” said another.

“We see you Tom…Whoop whoop,” said another.

Others joked that Tom was trying to get Kate’s attention.

“Tom Cruise and Kate Middleton were meant to be together,” said another.

“Kate is never going to give up her chance of becoming future future queen consort for Tom Cruise,” another commented.

However, others thought that they knew the real reason Tom was at Wimbledon – and claimed that he wants Kate to play matchmaker.

“I think #tomcruise is on the hunt for an English Rose. He doesn’t fancy her like that, he is friends and likes her as a person. Could Kate set up Tom with an eligible English woman?” one asked.

Tom is currently thought to be single after reportedly splitting from Hayley Atwell earlier this year.

Kate is due to attend the mens’ singles final today with Prince William.