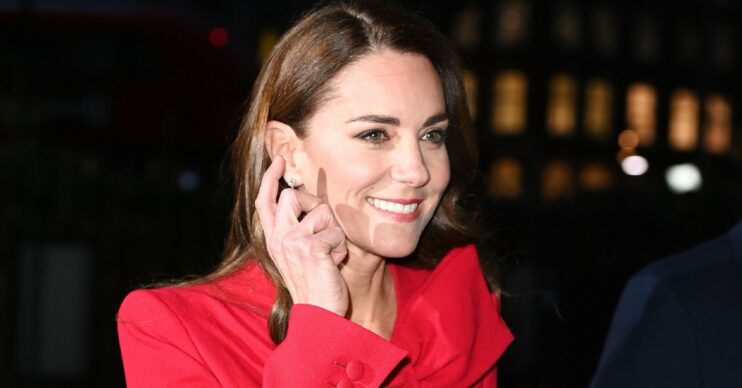 The Duchess of Cambridge looked as stunning as always

Kate Middleton stunned in a scarlet coat yesterday (Wednesday, December 8) as she arrived at Westminster Abbey with Prince William.

The Duchess of Cambridge was at the church to host a Christmas carol service alongside her husband.

What did Kate Middleton wear to the event?

Kate cut a stunning figure during her appearance at the church yesterday. The Duchess of Cambridge wore a £3,000 Catherine Walker coat.

The coat Kate wore is a scarlet version of the one she wore to Prince Phillip’s funeral.

Kate completed the outfit by donning the Queen Mother’s earrings and recycled her Miu Miu bag, which is reportedly worth £640. Kate previously wore the Miu Miu bag in September 2016.

The Duchess of Cambridge completed the look with her long brown hair down and a delicate necklace.

Her husband, Prince William, wore a navy blue suit, a white shirt, and a red tie.

What is the event for?

Kate Middleton and Prince William were at Westminster Abbey to host a Christmas carol concert. The concert will reportedly air on ITV on Christmas Eve at 7:30 pm.

The concert will celebrate the ‘incredible work’ of the heroes of the pandemic, including teachers, charity workers, and volunteers.

The event is designed to give the nation a moment to reflect and come together. The programme will combine traditional elements with a modern and inclusive feeling. This is so as to encompass people of all faiths, and those who have none.

Who else is taking part in Kate Middleton and Prince William’s event?

The event, which is called Royal Carols: Together at Christmas, will also feature musical performances from Ellie Goulding and Leona Lewis. Readings will also be delivered by Kate Garraway and British Paralympian, Kim Daybell.

The world-famous Westminster Abbey choir will be singing carols at the event. Tom Walker will also perform his new Christmas single, For Those Who Can’t Be Here, at the event too.

Kate Middleton and Prince William dropped the BBC as the event’s broadcaster in light of a bust-up with them. The Royal Family criticised a documentary aired on BBC Two recently. The documentary allegedly gave credibility to ‘overblown and unfounded claims’ about the Royal Family.

Royal Carols: Together at Christmas will air on ITV on Christmas Eve at 7:30 pm.

Leave us a comment on our Facebook page @EntertainmentDailyFix and let us know what you think of Kate’s outfit.