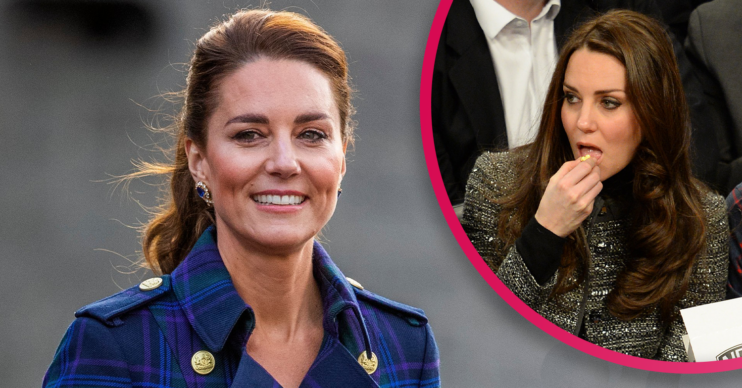 Pizza, popcorn and pasta are on the menu

Kate Middleton may live a life of royal luxury, but when it comes to her favourite food, the Duchess of Cambridge seems to like nothing more than home-cooked comfort food.

A keen cook, it’s been reported that Kate likes to prepare meals for her three kids – George, Charlotte and Louis – herself.

And, not only that, the kids help in the kitchen too.

So what are their favourite dishes? Well read on and we’ll tell you…

What does Kate Middleton have for breakfast?

It’s been reported that Kate is pretty partial to a smoothie in the morning.

Read more: The allergy that stops Kate Middleton from enjoying some aspects of family life

According to the Daily Mail, she blends kale, spirulina, matcha, spinach, coriander and blueberries together for a healthy start to the day.

It’s also reported that she gets her day off to a filling start by having a bowl of oatmeal.

What does she have for lunch?

Husband Prince William once lifted the lid on what the royals like for lunch.

During a trip to Japan House in London, he told one of the chefs that the salmon sashimi was “very impressive”.

And it appears both the Duke and Duchess of Cambridge are sushi fans.

William said: “My wife and I love sushi. We might have to come down here for lunch when no one else is in.”

It’s also been reported that watermelon salads, tabbouleh, ceviche and gazpacho are sometimes on the menu for Kate.

What’s for dinner in the royal household?

Kate’s home-cooked meals are hearty, entirely relatable and a little bit on the indulgent side.

The family are said to enjoy Italian food, with Kate telling Matthew Kleiner-Mann on a school visit that they often rustle up a comforting bowl of macaroni cheese.

He said: “She was telling us how much her children love cooking and how they cook for her.

“They made cheesy pasta the other day. One stirs the flour, one puts the milk and butter in. And they make salads and stuff.”

Kate is also a fan of making homemade pizza from scratch with the help of the kids.

Charlotte and George are said to love getting “their hands messy” while making the dough.

When it comes to dinner for William, Kate’s careful not to introduce too much spice.

On one royal engagement he let slip that she was a fan of spicy curries, but William definitely wasn’t.

She laughed and said he “struggled” with spicy food.

During the couple’s tour of India they mainly ate vegetarian food, “because I was told that was what they preferred”, one chef revealed.

It seems William is quite traditional when it comes to his food.

She most certainly does snack – usually on raw veggies and fruit, it’s been reported.

However, at a basketball game with William a few years back she was pictured tucking into a bag of popcorn.

She told Mary Berry: “I love making the cake. It’s become a bit of a tradition that I stay up till midnight with ridiculous amounts of cake mix and icing and I make far too much. But I love it.”

Kate has also been seen enjoying ice cream on a royal engagement in Wales.