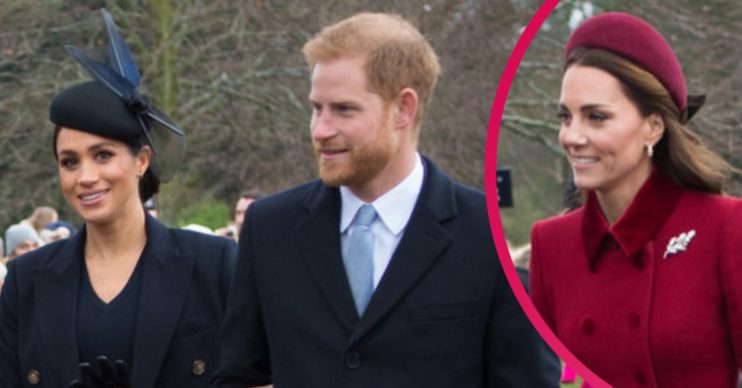 Back in March, Harry, 35, and Meghan, 38, attended the Commonwealth Day service at Westminster Abbey.

Attending amongst other senior royals, it was their final official engagement before they stepped down as senior royals.

They write: “Although Meghan tried to make eye contact with Kate, the duchess barely acknowledged her.”

Meanwhile Omid said in an interview with The Times: “To purposefully snub your sister-in-law… I don’t think it left a great taste in the couple’s mouths.”

Footage from the event showed Harry and Meghan sitting behind Kate, Prince William, Prince Charles and Camilla Duchess of Cornwall.

They appeared to exchange brief pleasantries with each royal as they took their seats for the service.

However, it’s not known what they exchanged.

Harry and Meghan stepped down from their roles at the end of March and now reside in Los Angeles, California.

A new life in Los Angeles

They are now living as reported ‘house guests’ at Tyler Perry’s mansion. And they have had to adjust to their new American life under lockdown restrictions.

Despite these imposed limitations, they have undertaken various charitable efforts in LA.

Read more: The Queen may reunite with her grandchildren this summer at Balmoral

Photographers have snapped them delivering food parcels to the needy, as well as volunteering at a soup kitchen.

The pair have also partaken in various video calls with several charities.

Most recently they spoke with young leaders from the Queen’s Commonwealth Trust.

They encouraged “uncomfortable” discussions to address the “wrongs” of the Commonwealth’s past.

“Unless we acknowledge the past”

Prince Harry said: “When you look across the Commonwealth, there is no way that we can move forward unless we acknowledge the past.

“So many people have done such an incredible job of acknowledging the past and trying to right those wrongs. But I think we all acknowledge there is so much more still to do.

Meghan has also made solo speeches to both her former high school and on for the United Nations program Girl Up.

*Finding Freedom is released on August 11.