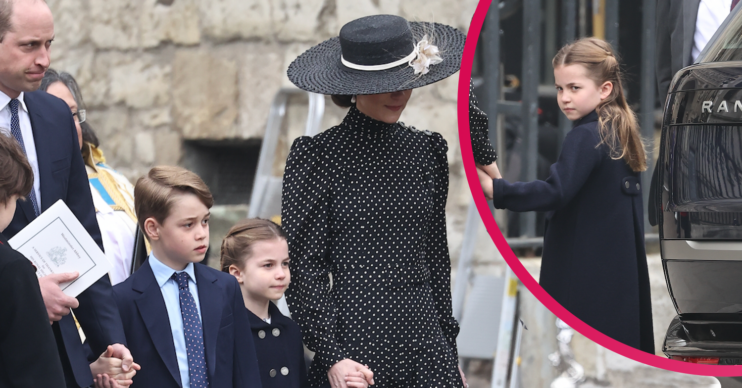 Kate Middleton made a heartwarming comment to daughter Princess Charlotte at Westminster Abbey today, according to a lip-reader.

According to the Daily Mail‘s lip reading expert Jacqui Press, Kate reassured her six-year-old that it was okay to smile at the memorial for Prince Philip.

Kate, 40, held a very serious-looking Princess Charlotte’s hand as they approached the doors to the Abbey.

What did Kate say to Princess Charlotte?

According to Jacqui, the Duchess of Cambridge then leant down and said to her daughter, “You can smile!”

Princess Charlotte was then seen beaming as they walked in to join the 1,800 mourners at the service.

Kate was looking extremely glamorous in a dark polka dot dress by Alessandra Rich, while Charlotte looked cute in a navy dress coat and tights.

Kate also wore earrings that belonged to Princess Diana for the service.

She was praised for her iconic style nod to her late mother-in-law.

Meanwhile, her husband, Prince William, walked into the ceremony with eight-year-old Prince George.

Jacqui added to the Mail that she thinks William said ‘let’s go in’ to his son, before they entered the church.

Meanwhile, royal fans thought the Queen looked ‘frail’ as she attended the service for her late husband.

Eyebrows were raised as Her Majesty was accompanied to Westminster Abbey by disgraced royal, Prince Andrew.

But watching Brits were mostly concerned about the Queen’s appearance as she marked a year without her husband.

And when the service of thanksgiving for Prince Philip came to an end, everyone agreed how emotional she looked.

Royal fans and supporters took to Twitter to comment, with many saying it broke their hearts to see the 95-year-old monarch look so fragile.

Others agreed that they could see her eyes glistening with tears as the service drew to a close.

Her appearance at the ceremony has renewed fears about her health, which have been circulating since late last year.

She has missed out on several high profile appearances, as well as being diagnosed with Covid just weeks ago.

One said: “Watching our Queen has just broke my heart. She is so frail but still so dignified. I really hope this isn’t the last time we see the Queen in public.”

Another commented: “The Queen looks frail but I am glad to see her.”

His funeral had to be largely scaled back due to Covid restrictions and photos of the Queen sitting alone broke the nation’s hearts then too.