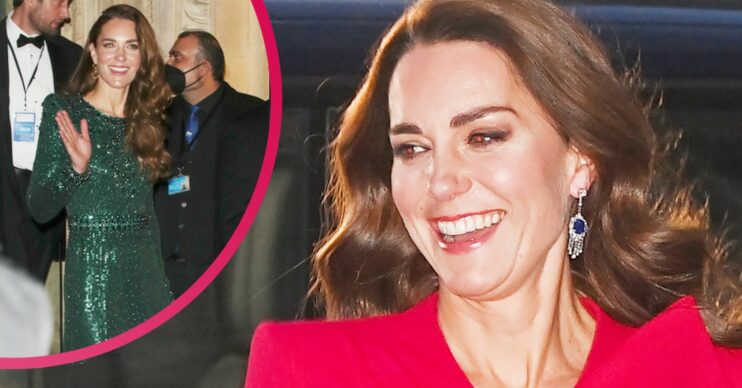 A body language expert has revealed the “flirtatious gesture” Kate Middleton made to Prince William in the royal couple’s Christmas card.

The Duke and Duchess of Cambridge revealed their card earlier this week and it raised a few eyebrows. Rather than a traditional, wintery scene, the card showed the couple and their three children in a summery setting.

William and sons George, eight and Louis, three, all sport shorts while daughter Charlotte, six, wears a summer dress. The shot was taken during a family trip to Jordan at half-term.

He said: “William and Kate’s family Christmas card is quite a significant change to the ‘normal’ kind of Christmas card a couple tends to release. I think there is a common theme from the pair that they are striving to show they are a normal family, just like the rest of us.”

Darren also says that everyone in the photo is smiling and that he believes it’s a happy time for the family right now. He also notes how Kate, 39, comes across as maternal, with her hand on George’s back.

But he also points out that Kate’s hand on her husband’s knee is a very flirtatious gesture.

He reveals: “It’s quite a flirtatious gesture for any photo – especially one that depicts a royal family and the future of the monarchy.”

“If anything, it reinforces the love the couple have for one another and William shows his approval by placing his hand on Kate’s leg.

“Such a personal move, almost restricted for romantic partners, again displays just how in sync the pair are as they match and mirror each other perfectly.”

In other royal news, Prince George has been voted the most popular and influential royal child in the world.

Creative resource Design Bundles recently conducted a study to find out who was the most popular royal child in the world.

To find out the answer, they calculated the global Google searches for 19 royal children. They also took into account how many Instagram hashtags the royal children featured in.

The aim of the study was not only to find out which was the most popular royal child, but which one was the most influential too.

The results of the study have now been revealed, and Prince George of Cambridge came out on top.

He Prince George pulls in over 200,000 Google searches every single month.

The study also found that the future king features in approximately 693,535 Instagram hashtags too.

In total, Prince George features in a combined total of 896,535 searches and hashtags.

This makes Prince George the most searched for and Instagrammed, and thus most popular and influential, royal child in 2021. And it’s by some distance too!

With George being the most popular royal child in the world, it makes sense that his younger sister, Princess Charlotte of Cambridge is the second most popular.

This made her the second most popular royal child worldwide. However, she was still over 210,000 searches behind her older brother.

George and Charlotte’s younger brother, Prince Louis, was third on the list.

Did you spot Kate’s flirty gesture? Head to our Facebook page @EntertainmentDailyFix and let us know!