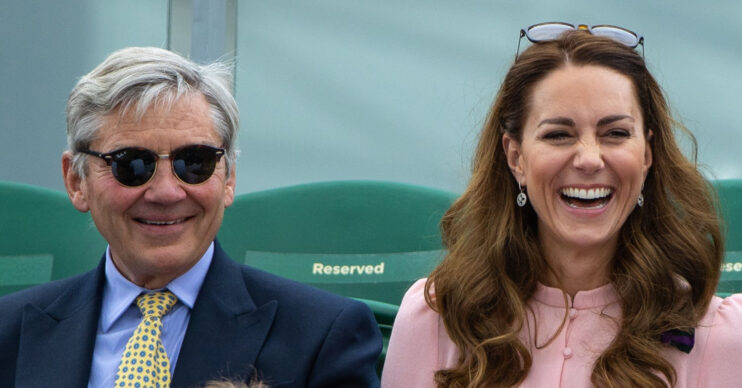 The Duchess of Cambridge, 39, appeared radiant as she debuted a pastel pink dress.

And she bought along a very cute date indeed – her dad Michael Middleton, 72.

The father and daughter were photographed engaging with Wimbledon fans before taking a seat.

And, as they sat down for the game, they were seen laughing and chatting away with fellow guests.

Kate Middleton looks delighted to be at Wimbledon

What’s more, they even had a giggle as they engaged in a Mexican wave.

Kate and Michael were seen joining in as they laughed and threw their hands up in the air.

The duo are at Wimbledon to watch Novak Djokoic’s game against Matteo Berrettini.

If Djokoic wins the Grand Slam, he will make history by equalling tennis legends Rafael Nadal and Roger Federer’s in their joint-record of 20 Grand Slams.

So why isn’t Prince William at Wimbledon?

However, Prince William is not in attendance, as he will be preparing to cheer on England vs Italy tonight at the hotly anticipated Euro  2020 final.

As the nation waits in anticipation of a potential historic victory for England, Prince William has already piled on the pressure.

The Duke of Cambridge made a video message in which he vowed his support towards the England team and urged them on to victory.

His message included: “I can’t really believe this is happening. So exciting and I just wish you the very best of luck.”

“You bring out the very best of England and we are all behind you. The whole country is behind you. So, bring it home.”

Kate was able to end her self-isolation on Saturday to deliver trophies at Wimbledon.

The duchess had been forced into a five-day quarantine after she came into contact with someone with COVID-19.

But back on form this Saturday, she watched the Women’s Singles Final with Prince William.

And also presented the trophies to winner Ash Barty of Australia and Czech finalist Karolina Pliskova.

Here they penned: “What an incredible match and performance by both athletes! Congratulations @ashbarty on being crowned #Wimbledon champion.

“It was amazing to see the atmosphere and support from the fans echoing through centre court once again.

“Well done to @Wimbledon and the staff on continuing to make the Championships such a special event.”