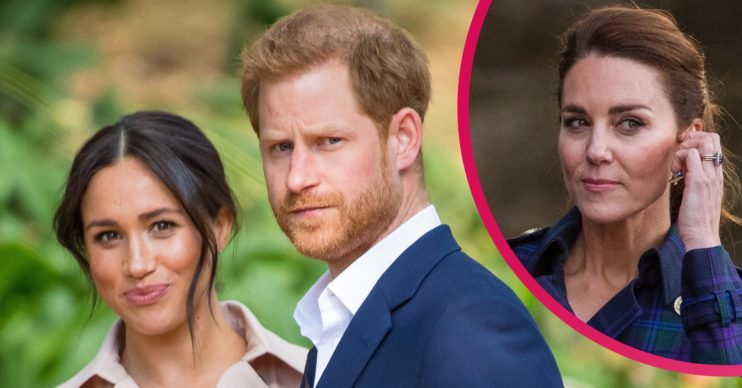 The name Philippa is currently the bookies' favourite

Kate Middleton could be the reason Prince Harry and Meghan Markle decide not to name their baby Philippa.

The moniker is currently the bookies’ favourite for the couple’s unborn daughter.

Harry and Meghan are thought to be considering it to honour Prince Philip, who died aged 99 in April.

But according to one Royal expert, they may be forced to back down as Kate’s sister is also called Philippa.

The 37-year-old was given the name at birth and when she was Christened, although is known as Pippa.

Brittani Barger, deputy editor of Royal Central, told the Daily Star: “I don’t think that they will name their daughter Philippa because that’s Kate’s sister’s name.

“People may hope they name their daughter that in memory of Philip, but I don’t see that happening.”

She added: “I think whatever name they choose is going to be unexpected like Archie was.”

Prince Harry and Meghan announced they are expecting a daughter during their bombshell Oprah Winfrey interview.

The US chat show host asked the couple: “Is it a boy or a girl?”

He then said, “It’s a girl” as Oprah squealed.

The Duke of Sussex went on to tell Oprah it was “amazing” to see a baby girl on the screen during an ultrasound scan.

Now we’ve got our family. There’s four of us and our two dogs, it’s great

He added: “To have any child, any one or any two would be amazing, but to have a boy and then a girl… what more could you ask for?

“Now we’ve got our family. There’s four of us and our two dogs, it’s great.”

Oprah asked the couple if they are “done”, to which Meghan replied: “Two is it, two is it.”

The couple, whose son Archie is two, have not given a specific due date for their daughter. They have instead said she will be born “in the summertime”.

Nod to the Queen?

Harry and Meghan had announced their baby news on February 14, 2021 – Valentine’s Day.

Their spokesman said at the time: “We can confirm that Archie is going to be a big brother.

Read more: How will the Queen celebrate her official birthday and when is it?

Meanwhile, with the name Philippa out, sources have said Harry and Meghan are considering making a ‘lovely nod’ to the Queen with their daughter’s name.

It’s thought they’re considering calling the tot Lily because of its similarity to the Queen’s nickname Lillibet.

An insider told OK!: “It would be a lovely nod to the Queen who was known as Lillibet during her childhood, but it’s also always been one of Harry’s favourite names.”

What do you think Harry and Meghan will call their daughter? Leave us a comment on our Facebook page @EntertainmentDailyFix and let us know.