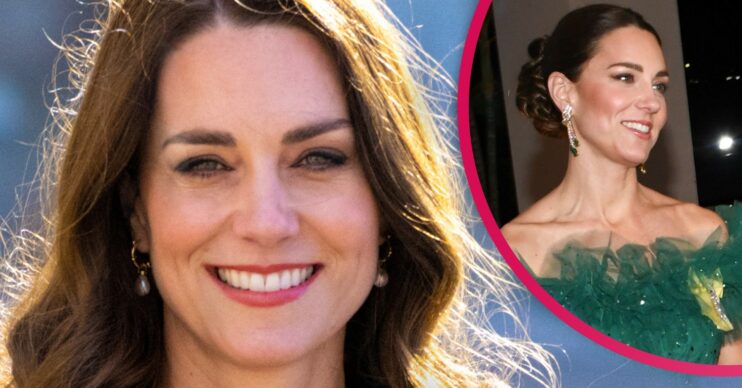 The Duchess of Cambridge has stolen the show again!

Kate Middleton has once again won over royal fans with her tour outfit as she stunned in a green dress last night.

The Duchess of Cambridge and her husband Prince William attended a state dinner hosted by the Governor General of Jamaica.

The royal couple visited Jamaica as part of their eight-day Caribbean tour to mark the Queen‘s Platinum Jubilee this year.

The duchess wore a beautiful emerald green dress by Jenny Packham for the reception.

The gown featured a bardot neckline and sequin detailing.

Kate wore her hair in an updo and accessorised with earrings and a bracelet from the Emerald Tassel Parure collection – which the Queen lent her.

The duchess also sported her Royal Family Order and the GCVO Star, which Her Majesty gifted her in 2019.

Royal fans were in awe of Kate’s look last night, with many branding it “breathtaking” and “stunning”.

One person said: “Catherine is breathtaking.”

A third added: “Oh my god, Kate has knocked it out of the park tonight! She looks breathtaking.”

One gushed: “Kate is perfection.”

The duchess has won over royal fans with all her looks so far on the Caribbean tour.

She recently stunned in a yellow summery dress as she and William arrived in Jamaica.

Kate also wowed fans with a more dressed down look as she wore a white t-shirt and khaki trousers.

The duke and duchess were visiting Caracol, a stunning ancient Mayan archaeological site.

More recently, during their reception dinner last night, William gave a speech as he expressed his “profound sorrow” over slavery.

He told the guests: “I strongly agree with my father, The Prince of Wales, who said in Barbados last year that the appalling atrocity of slavery forever stains our history.

“I want to express my profound sorrow. Slavery was abhorrent.

“And it should never have happened.”

What did you think of Kate’s dress last night? Head to our Facebook page @EntertainmentDailyFix and let us know.