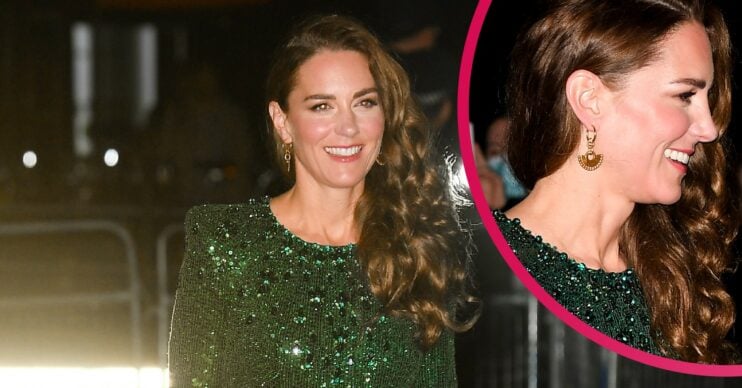 The Duchess of Cambridge looked as stunning as ever!

Kate Middleton, Duchess of Cambridge, stole the show at the Royal Variety with a dazzling green dress.

It featured performances from the likes of Ed Sheeran, Sir Rod Stewart, and Jane McDonald.

What dress was Kate Middleton wearing at the Royal Variety?

Despite all the famous pop and rock stars in attendance, it was Kate Middleton who stole the show with her sparkling green dress.

The bejewelled green gown worn by Kate Middleton was made by Jenny Packham. Kate completed the ensemble with a matching forest green clutch, also made by Packham, and chandelier hoop earrings by Missoma.

It is understood that Kate Middleton first wore the dazzling green dress during an official royal tour of Pakistan back in 2019.

It’s safe to say royal fans liked Kate’s dress last night. Many took to Twitter to rave about it.

“Is it just me or do you think Kate Middleton is one of the most stylish royals ever? I can’t help but like everything she wears!” one royal fan gushed.

“HRH Duchess of Cambridge is a stunning beauty. She looked gorgeous!” another said.

“She looks beautiful! I don’t think there is a colour she can’t wear. The green with her curls is stunning!” a third wrote.

Why were the royal couple at the event?

This is the fourth time Kate Middleton and Prince William have been the royal guests of honour at the event. They previously attended in 2014, 2017, and 2019.

The annual event is staged to aid the Royal Variety Charity. Funds raised from the yearly event go to people in the entertainment industry who are in need of help.

This year’s show was particularly special as it celebrated 100 years of patronage from the reigning monarch. King George V was the charity’s first royal patron, back in 1921.

It was also a fitting event as the Royal Albert Hall, which was opened by Queen Victoria, was celebrating its 150th anniversary.

What else has Kate Middleton been up to?

Kate Middleton and Prince Willam’s appearance at the Royal Variety comes just days after the Queen was seen attending in-person engagements once more. The monarch had previously missed engagements due to ill health.

She was seen on Wednesday greeting General Nick Carter at Windsor Castle.

The Queen also missed last Sunday’s Remembrance Service at the Cenotaph. Kate Middleton, Camilla, and Sophie, Countess of Wessex were stood on the balcony in her place at the service.

It is expected that senior royals, such as Kate Middleton and Prince William, will be stepping up more in the Queen’s place as the monarch approaches her 96th birthday.

You’ll be able to catch a glimpse of Kate Middleton’s dazzling green dress again in December. That’s when the Royal Variety is due to air on TV in the UK.

What did you think of Kate Middleton’s dazzling green dress?  Let us know over on our Facebook page @EntertainmentDailyFix.