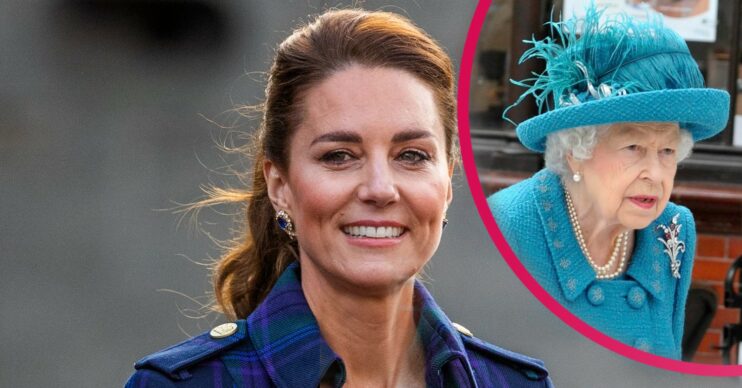 Kate Middleton asked the Queen to help her solve her parenting struggles prior to hiring a nanny, a royal expert has claimed.

The Duchess of Cambridge and Prince William apparently always felt they would like to be present and available to give their children a normal upbringing.

When Kate gave birth to their eldest child, eight-year-old Prince George, the couple reportedly moved in with her parents Carole and Michael to get a helping hand with their new arrival.

However, it seems moving home and caring for a young baby while carrying out their royal duties turned out to be quite the challenge.

In fact, according to royal expert Katie Nicholl, Kate felt compelled to turn to the Queen for advice.

Talking about the move, the author and broadcaster says she only really opened up about her struggles when she had the heart-to-heart with the Royal Family matriarch.

Katie told True Royalty’s documentary Kate Middleton: Heir We Go Again: “Kate was having a conversation with the Queen in which she confided that she had found being with George on her own…

“…and not having a full-time nanny or a maternity nurse, very hard.

“William and Kate wanted to be hands-on parents, and they did it until September and then they recruited a nanny.”

The couple made the choice to hire Maria Borrallo, a prestigious Norland College graduate.

Maria is still on the payroll for the family. She helps to care for all the Cambridge children. That means George, and his siblings Princess Charlotte, six, and three-year-old Prince Louis.

However, that hasn’t stopped other members of the family from doing their bit. According to Katie, Kate’s mum Carole still plays her role in helping to raise her grandchildren.

She said: “One of the things that allows William and Kate to be so ordinary is the presence of the Middletons in their lives.

“Carole is a regular through those golden gates at Kensington Palace, she whizzes through in her Land Rover. There is no security because everybody knows her.

“She turns up to help with bedtime and bathtime. She is absolutely indispensable.”

What do you think of this story? Head to our Facebook Page @EntertainmentDailyFix and leave a comment to let us know!