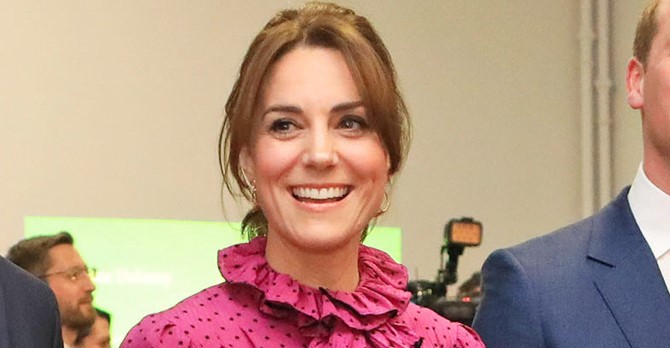 Worn as she attended a reception with Prince William in Dublin

The Duchess of Cambridge has drawn fashion comparisons to Princess Diana after making an appearance in an eye-catching magenta dress.

Kate Middleton, 38, dazzled in a polka dot Oscar de la Renta outfit last night as she attended a reception in Dublin with Prince William thrown by the deputy head of government Simon Coveney.

Some observers in the press felt Kate’s dress was similar to that designed by Donald Campbell which her late mother-in-law wore on a couple of occasions in the 1980s.

She accessorised her look with a black clutch bag, black heels and gold earrings.

William’s mother wore the Campbell pink and white number in 1983 as she arrived in Perth during a tour of Australia when she was just 22.

Diana accessorised it at that event with a pink fascinator.

She then donned the dress again in 1985 as she made a trip to St Peter’s Basilica in Vatican City.

She wore a glittering emerald green dress for a reception at the Guinness Storehouse.

According to Town & Country, the garment was by the brand The Vampire’s Wife.

Earlier in the day, when the royal couple were pictured arriving in Ireland for the start of their tour, Kate was also pictured in green in an apparent tribute to the country.

As she stepped off a plane at Dublin International Airport, Kate made an impression in an emerald jacket worn over a floral-patterned green dress.

She matched the outfit with a pair of emerald green shoes and a lime green bag.

Wednesday night’s reception was the last engagement of the second day of the royal couple’s tour of the Republic of Ireland.

Williams told those in attendance that Ireland and the UK had shared a “complex” history in his keynote speech.

Other destinations for the Cambridges’ brief tour include Galway, Meath and Kildare.

They are due to visit a local Gaelic Athletic Association club this afternoon as part of their last day across the Irish Sea.