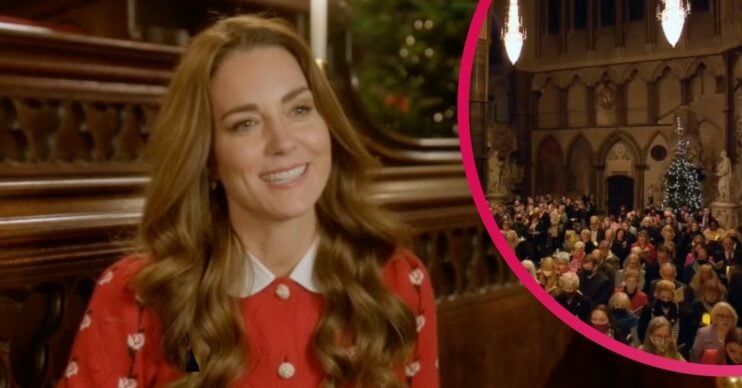 Kate Middleton beams in first look at Royal Carols: Together at Christmas

The show, hosted by Kate, is going to feature carols, readings, and musical performances, and will pay tribute to the work done by individuals and organisations during the COVID-19 pandemic.

What is Kate Middleton’s Christmas show about?

Royal Carols: Together at Christmas is a festive special that is going to air on Christmas Eve on ITV and ITV Hub. Kate Middleton will host the programme.

The concert is going to feature a whole host of musical performances and readings performed by well-known stars.

Leona Lewis and Ellie Goulding will be performing at the concert, as will Tom Walker, who will be singing his new Christmas song, For Those Who Can’t Be Here. GMB presenter Kate Garraway and British Paralympian, Kim Daybell, will also deliver readings during the show.

Read more: Prince William lifts lid on Christmas with kids as he and Kate ‘scrap plans to spend time with Queen’

The world-renowned Westminster Abbey choir will also be singing carols during the programme.

The programme has been made to pay tribute to the incredible work done by the “heroes of the pandemic”. These include charity workers, teachers, and volunteers.

Kate Middleton’s Christmas special has been designed to give the nation time to reflect and come together. The Royal Foundation supported the concert.

What happens in the teaser trailer?

James McAvoy is narrating the teaser, which includes clips from the show.

The teaser begins with Kate Middleton and Prince William arriving at Westminster Abbey.

“Join her Royal Highness, the Duchess of Cambridge,” James says. Kate Middleton, wearing a festive red jumper, then talks about how she is looking forward to hosting the show.

“I’m so excited to be hosting Together at Christmas here at Westminster Abbey,” she says.

The trailer then gives viewers a glimpse of a cosy-looking Westminster Abbey, which is full of guests and young carol singers.

What else happens in the trailer for Kate Middleton’s Christmas special?

More clips are shown of the upcoming festive special that Kate Middleton is spearheading.

At one point during the teaser trailer, Kate Garraway delivers a reading, whilst Ellie Goulding is glimpsed singing.

Tom Walker plays his guitar on a stage surrounded by candles, and Leona Lewis performs at the very head of the Abbey in full view of all the guests.

“With special guests and music performances,” James McAvoy says, teasing viewers with what’s to come in the highly anticipated show.

Royal Carols: Together at Christmas will air Christmas Eve at 7:30 pm on ITV and ITV Hub.

Will you be watching Kate Middleton’s Christmas concert? Leave us a comment on our Facebook page @EntertainmentDailyFix and let us know.