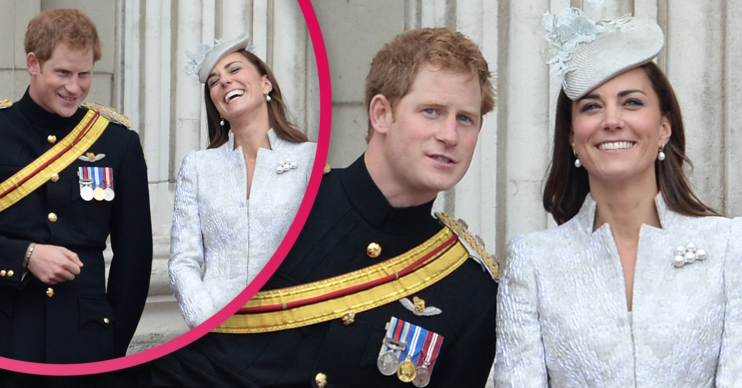 Kate Middleton: 5 things we miss about her friendship with Prince Harry

He once said she was the sister he 'always wanted'

Kate Middleton and Prince Harry met as teenagers and had Brits enthralled by their close relationship.

If there was an official engagement or a Buckingham Palace balcony appearance, the two of them were often together – Kate throwing her head back in laughter at something Harry said.

But in recent years that’s changed, with Harry now living thousands of miles away in California.

The pair doubtless miss the closeness they once shared, and here’s five things we miss about their friendship…

Kate Middleton and Prince Harry: The sister he never had

When Prince William and Kate announced their engagement in 2010, Harry was one of the first members of the royal family to comment.

He told German newspaper Bild: “I’ve always wanted a sister and now I’ve got one.

“I’ve known Kate for years and it’s fantastic that she’s becoming part of the family.”

And Harry certainly went all out to welcome her into the institution too.

She added: “Harry made Kate laugh and that probably helped her through her daunting induction into royal life.”

For a while, single Prince Harry played third wheel to the Duke and Duchess of Cambridge on events.

But she never made him feel like a gooseberry.

Read more: After that Bond premiere, the most dazzling dresses Kate Middleton has ever worn

In fact, if anyone felt left out it should’ve been William.

Kate and Harry always seemed to be in cahoots with each other, cracking jokes and poking fun at William.

One royal insider told the Daily Mail that Kate is a big fan of Harry’s laidback attitude.

“Harry appeals to her sillier side because he is carefree, footloose and loves banter,” they said back in 2016.

“He finds things funny about people and says so.”

That sense of fun was most certainly on display when Harry, William and Kate visited the Harry Potter film set back in 2013.

There, the trio were seen giggling like children as they played with wands during the tour.

Their charity endeavours – and the end of the ‘Fab Four’

William, Harry and Kate launched Heads Together through their Royal Foundation back in May 2016.

The aim was to end the stigma around mental health and it was promised we’d see the trio “working in partnership with inspiring charities to change the national conversation on mental wellbeing”.

Except it wasn’t to be.

However, it all came crashing down in June 2019 and the first forum was to be their last.

It emerged that Harry and Meghan were leaving to set up their own charitable foundation.

And that appeared to signal the end of the “Fab Four”, with the four last being pictured heading to church together as a group on Christmas Day in 2018.

Things we miss about Kate Middleton and Harry: The prince playing doting uncle

Before becoming a father to Archie and Lilibet, Harry doted on Prince George, Princess Charlotte and Prince Louis.

He told the Daily Mail: “They are the most amazing things ever.”

However, that relationship must’ve now surely fallen by the wayside.

The kids and Harry can only catch on Zoom calls, while his children don’t really seem to have much of a relationship with the Cambridges.

Little Lilibet has never been to the UK, and she’s never met her three young cousins.

It’s a far cry from the relationship Harry shared as a youngster with his cousins Princesses Beatrice and Eugenie.

Harmony in the royal family

By far the biggest thing we miss, though, since distance got in the way of Prince Harry and Kate’s friendship, is a sense of harmony within the royal family.

Of course, the world watched as Kate helped brothers William and Harry reunite at Prince Philip’s funeral earlier this year.

But not even Kate’s peacemaking skills seem enough to help heal the wounds Harry has been left with following his departure from the royal family.

Could we see the pair back in the spotlight as the best of friends at some point in the future?

At this December’s Diana Awards maybe?

We most certainly hope so.

Head to our Facebook page @EntertainmentDailyFix and tell us your favourite Harry and Kate moment.