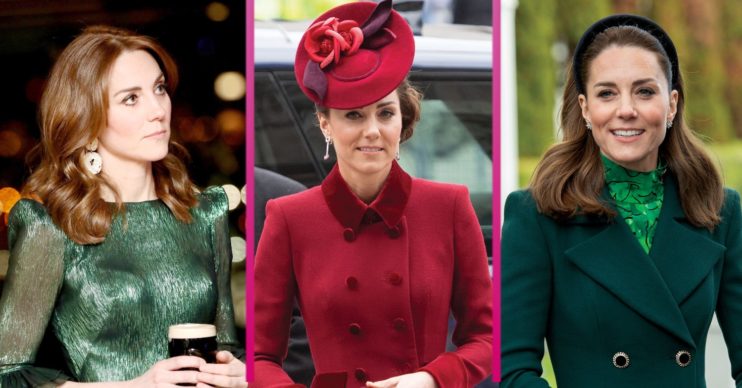 Take a look at the Kate Middleton's most fashionable moments

Kate Middleton has worn some incredible outfits over the past 12 months, despite spending the majority of it in lockdown.

From red carpet gowns to comfortable jumpers, the Duchess of Cambridge has continued to impress royal fans with her stylish looks – which often sell out within days of her wearing them.

Here, we take a look back at the Duchess’ most memorable style moments over the past year.

Back in February, Kate stole the show as she graced the Bafta Awards red carpet at the Royal Albert Hall.

The custom-made floor-length white and gold Alexander McQueen gown is a clear favourite of Kate’s, having previously worn the dress during an official visit to Malaysia in 2012.

This time around, the dress featured mid-length fitted sleeves and structured shoulders.

Last time, the sleeves were made from floaty white chiffon.

During her and Prince William’s Dublin tour in March, the Duchess dazzled in green as she visited the famous Guinness Storehouse.

She wowed in a glittering emerald green dress for a reception at the famous brewery and tourist attraction, where she was pictured enjoying a cool pint.

The garment was by the brand The Vampire’s Wife and featured subtle frills on the sleeves.

And the stylish looks didn’t end there.

Later on in the tour, Kate, 38, wrapped up while visiting Irish President Michael D. Higgins.

The Alessandra Rich dress, which she paired with a darker green coat from Catherine Walker, was completed with a pair of simple black heels.

Meanwhile, her hair was perfectly pulled back with a classic suede head band.

Back in August, Kate and William headed to Barry Island in Wales for a series of fun appearances.

For the visit, which included a stop at a local care home, the Duchess opted for a floral Emilia Wickstead dress.

She completed the look with a pair of nude laced wedges and simple jewellery.

The couple later visited Marco’s cafe, which has been made famous by the TV series Gavin and Stacey.

Kate chose a striking red coat and a tartan scarf for her visit to Cardiff Castle at the beginning of December.

The Duchess’ trusty Alia Hoops from Spells of Love completed the look.

Kate made a number of appearances from the comfort of her home in Norfolk during lockdown.

Royal fans loved her effortless chic looks, including a striped Joostricot jumper for an interview with William on BBC Breakfast in April.

Meanwhile, the royal opted for a Bealuah London shirt dress for a virtual appearance in May.

The £550 floral design is almost identical to a dress worn by Princess Diana at Oman University in November 1986.

Just like the rest of us, the royals are permitted to mask up in public settings – and Kate is no exception.

The royal opted for a white and blue floral Amaia face covering while out in Scotland with husband William in December.

The accessory perfectly complimented her blue Catherine Walker coat, which she wore with a Strathberry bag and suede boots.

Completing the look were a pair of sapphire earrings, which once belonged to Princess Diana.