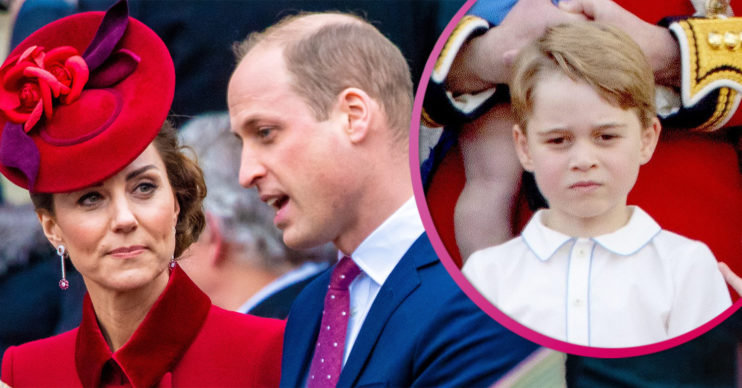 Kate Middleton and Prince William are reportedly facing a dilemma about whether to send their son George away to boarding school.

Prince George, six, and his sister Princess Charlotte, five, are both pupils at Thomas’s Battersea school in London.

However, they have recently been home-schooled due to the coronavirus pandemic, which caused schools across the UK to close.

Royal children are traditionally sent to boarding school from the age of eight.

However, according to a royal expert, Kate and William may chose not to follow tradition with their kids.

Ingrid Seward told OK! magazine: “Kate and William are modern parents and will weigh up the decision very carefully.”

She said she believes the Duke and Duchess of Cambridge will “see how the children’s personalities develop”.

She thinks the couple will “take into consideration whether or not they would be happy to live away from home”.

Ingrid added that she thinks William and Kate will focus on their children’s mental health as the duke has “experienced terrible trauma in his own childhood”.

William and Kate to go against tradition?

She said: “We’re used to seeing the royals breaking with tradition these days so it won’t be a huge shock if they do things their way.

“I think William and Kate’s view will be, if the children are happy in their school, why change things.”

However, Ingrid said if she were Kate she’d feel “more secure” if George was “tucked away at boarding school” since he’s heir to the throne.

William was eight-years-old when he began attending Ludgrove School in Berkshire.

She added that George’s sister Charlotte “appears very confident” so would “suit the boarding school environment”.

Kate and William are modern parents and will weigh up the decision very carefully.

However, George is a “shy little boy” therefore he “might not have the right character for it just yet”.

Earlier this month, Kate and William thrilled fans by sharing new photos of their children.

To mark both William’s 38th birthday and Father’s Day, new photos were released of the doting dad and his kids.

The Duke and Duchess of Cambridge are very pleased to share a new picture of The Duke with Prince George, Princess Charlotte and Prince Louis ahead of The Duke’s birthday tomorrow. The picture was taken earlier this month by The Duchess.

What did the photos show?

The post read: “The Duke and Duchess of Cambridge are very pleased to share a new picture of The Duke with Prince George, Princess Charlotte and Prince Louis ahead of The Duke’s birthday tomorrow.

“The picture was taken earlier this month by The Duchess.”

Do you think Kate and William should stick with tradition by sending George to boarding school? Leave us a comment on our Facebook page @EntertainmentDailyFix and let us know.