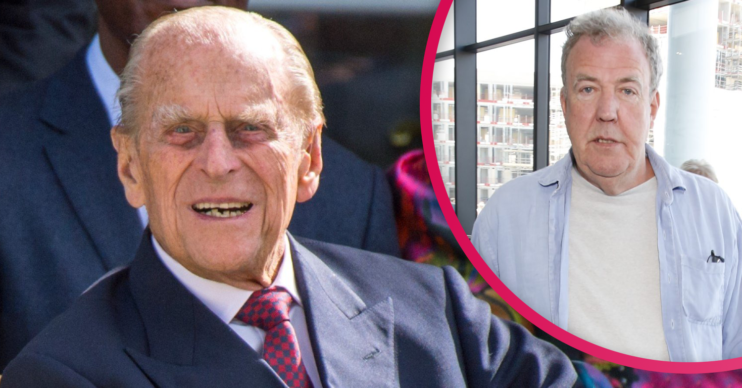 He has quite the soft spot for the late duke

Jeremy Clarkson has paid tribute to Prince Philip and declared it’ll be a “very different world without him”.

The Duke of Edinburgh‘s death was announced by Buckingham Palace yesterday (April 9).

And, writing in his column in The Sun today, the former Top Gear host has paid his respects.

What did Jeremy Clarkson say in his Prince Philip tribute?

Jeremy‘s tribute to Prince Philip was a little tongue in cheek and noted that Brits saw him as “the nation’s gruff but fiercely loyal uncle”.

He also mentioned Philip’s good looks – and said that Loose Women star Gloria Hunniford “reckoned he was still hot only a couple of months ago”.

He was a very good looking man. Even I’d have turned for him back in the day.

He stated that he’d met him once at a “stupid television awards thing”.

Jeremy said he knew it wasn’t Philip’s “scene” because he thought he was chef Ainsley Harriott.

“Sometimes he would shut down a question he considered impertinent with a curt invitation to eff off, but usually he’d give the annoying reporter a Thanos-style laser blast from those piercing blue eyes,” Jeremy said.

“He was a very good looking man. Even I’d have turned for him back in the day.”

He said he finds it “sad” that it’s likely to be a “small and muted affair”.

The Who Wants To Be A Millionaire? host added that although Philip wanted “no fuss”, he would never have imagined quite how he would have to be taken at his word.

“I know it’s what he wanted – ‘no fuss’ – but even he couldn’t have imagined that, thanks to COVID, that would mean 15 people and no singing,” Jeremy said.

He added that he thinks the world will be a very “different” place without the Queen’s husband of 73 years.

Head to our Facebook page @EntertainmentDailyFix and tell us if you agree with Jeremy Clarkson’s tribute.