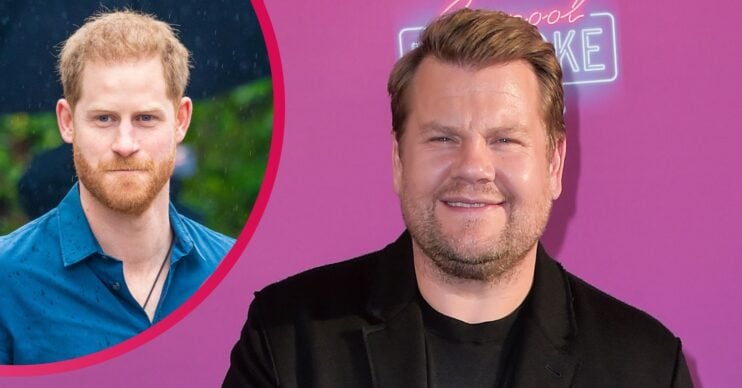 James Corden has revealed his kids have playdates with Prince Harry and Meghan‘s children.

And James has nothing but good words to say about Harry, branding him a “devoted husband and father”.

Since moving to America, Prince Harry and Meghan have made friends with plenty of Hollywood stars.

One of those stars is actor and chat show host, James, who happens to live an hour away from the royal couple’s mansion in California.

During an interview with The Sun, James spoke about his friendship with the Duke and Duchess of Sussex.

In the interview, James confirmed that he had been to visit Harry and Meghan’s home.

“I have [visited]. It was more a sort of play date scenario [with the kids]. Then we went out for dinner after, it was lovely,” he said.

The chat show host continued, speaking very highly of the Duke of Sussex and his wife.

“Look, I’m a huge fan of both of them. Obviously, I know Harry better than I know Meghan but I think it’s really hard to judge, or be judgmental,” he said, referencing their decision to stop being working royals.

He then went on to say that he has a huge amount of “respect” and “admiration” for the Duke of Sussex.

He said that anyone who has been around him will feel the same too.

“I think he is a devoted and loving husband and father and I think what they have done [leaving working royal life] is incredibly brave and I’ll always be in their corner,” he said.

The 43-year-old also added that he is a big fan of Prince William and Kate Middleton too.

James’ kind words about the Duke of Sussex come not long after it was confirmed that Harry and Meghan WILL be attending the Queen’s Platinum Jubilee next month.

A statement released said: “Prince Harry and Meghan, The Duke and Duchess of Sussex are excited and honoured to attend The Queen’s Platinum Jubilee celebrations this June with their children.”

This will reportedly be the first time that the Queen will meet 11-month-old Lilibet.

However, Harry and Meghan won’t be on the palace balcony for Trooping the Colour.

Only working royals will be up there on the day with the Queen.