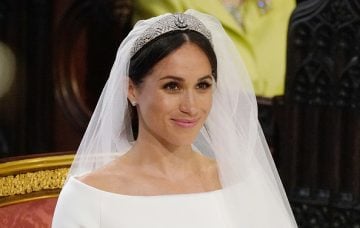 How Meghan’s family ‘celebrated’ the wedding

They had a feast of their own

As the new Duke and Duchess of Sussex and their guests tucked into langoustine, smoked salmon and quails eggs, Meghan’s US family had their own regal-themed feast, in Burger King.

And while Meghan wore a tiara borrowed from the Queen, aunt Theresa Markle, 67, and cousin Nick, 38, donned paper crowns in a nod to their relative becoming part of the royal family.

As Meghan and Harry and their 600 guests were being hosted by the Queen in St George’s Hall in Windsor, 4,300 miles away in Sandford, Florida, Theresa and Nick donned the fast-food chain’s signature golden crowns and tucked into breakfast.

According to the Daily Mail they went for breakfast after getting up early to watch the live television broadcast at home.

They enjoyed a Double Bacon Breakfast Sourdough King and Hash Browns, before leaving with coffees.

And while Meghan arrived at the wedding in a hand-made Rolls Royce, and left in the Ascot Landau carriage, her only aunt on her father’s side of the family and first cousin Nick left the burger joint in a battered, red Chevrolet Cobalt with missing hubcaps.

The only member of the Markle family invited to the wedding was her father Thomas Markle, who was due to walk her down the aisle.

But after he confessed to setting up paparazzi shots of himself in return for cash, speculation over whether he would even attend and the news he undergone emergency heart surgery led to Meghan releasing a statement through Kensington Palace.

It read: “Sadly, my father will not be attending our wedding. I have always cared for my father and hope he can be given the space he needs to focus on his health. I would like to thank everyone who has offered generous messages of support.” 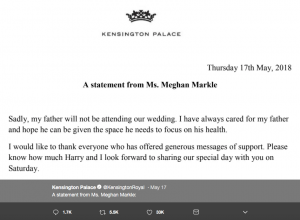 In the end the only member of Meghan’s family who attended the wedding was her proud mum Doria Ragland.