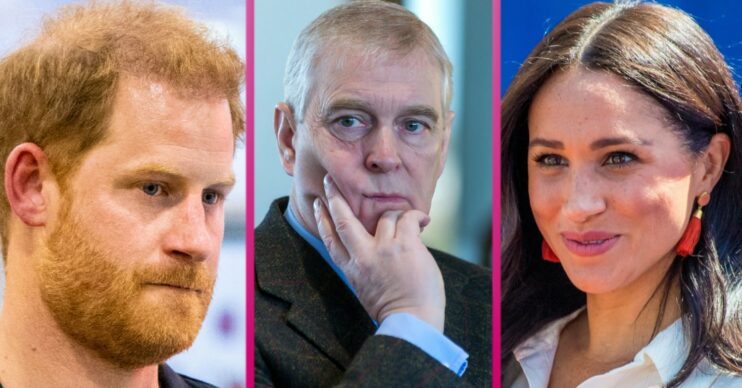 Real reason Harry, Andrew and Meghan have been snubbed from Jubilee balcony moment?

Should they be invited to participate, or is it right they're excluded?

A ‘good reason’ why Prince Harry, Meghan Markle and Prince Andrew won’t be part of the Jubilee Buckingham Palace balcony moment has been claimed by a newspaper pundit.

On Friday, the palace confirmed which members of the Royal Family will be on show on June 2.

A statement said only ‘working royals’ will be part of the line up for the RAF flypast.

And while none of Harry, Meghan and Andrew have made the cut for the Trooping the Colour appearance, one observer reckons there is a more precise reason why.

According to columnist Carole Malone, there’s concerns the public may react negatively to the trio.

That’s because negative headlines have dominated ever since Harry and Meghan stepped away from public life.

Prince Andrew, the Queen’s second son, meanwhile settled a civil sex assault case out of court with accuser Virginia Giuffre earlier this year. Ms Giuffre had accused the Duke of York of sexually assaulting her when she was 17 – allegations he’s always denied.

Bearing all of this in mind, Carole said all three may face boos if they appear on the balcony.

The journalist admitted the Sussexes may bridle at comparisons.

Carole wrote in the Express: “Of course, Meghan and Harry will hate the fact they’ve been lumped into the Bad Royals Box with Prince Andrew because comparisons will be made that all three of them have disgraced the royal family, trashed its reputation and hurt people who did nothing to deserve it.

“And it’s a good thing they won’t be on the balcony.”

She added the crowds could “boo” if the trio appeared on the balcony.

The Queen‘s mobility is reportedly a reason for the 96-year-old monarch making fewer appearances these days.

However, it seems she will appear on the balcony herself.

The Palace said: “Her Majesty is looking forward to the weekend and will be taking part in the celebrations, but her presence will not be confirmed until much nearer the time or even on the day itself.”