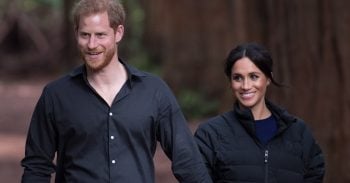 It was apparently one of Princess Diana's favourite names

The Duchess of Sussex is set to welcome her first child into the world with husband Harry any day now.

Fans are patiently waiting for Baby Sussex to arrive and many are speculating on the gender and name of the royal baby.

A string of names have been thrown into the mix from Elizabeth and Diana to Arthur and Albert.

However, bookies have suggested Italian name Allegra could be the running if their baby is a girl as it was reportedly one of Harry’s late mum Princess Diana’s favourite names.

Even though Meghan and Harry have not yet revealed the gender of their unborn baby, both girl and boy name choices have been suggested.

If the couple have a little girl, the names Grace, Diana and Elizabeth are favourites.

For a boy, the names Arthur and Philip are popular choices.

But Allegra has entered the running this week, with bookies slashing odds from 100/1 to 20/1.

The Italian name means “joyful and lively” and it’s been said it was the name Diana wanted if she had a baby girl.

Alex Apati of Ladbrokes told the Express: “It’s probably the most bizarre eleventh hour move we could’ve seen, but the money is coming in thick and fast for Allegra.

“We wouldn’t be surprised to see the name right up there with the frontrunners by the time the birth gets announced.”

Meanwhile, many fans believe Meghan has already gone into labour as witnesses have apparently seen a number of cars with a police escort rushing through Chiswick, west London, which is between the capital and Windsor, on Monday.

The couple currently reside at Frogmore Cottage there.

On Friday (April 26), supporters were convinced the tot was on the way after an ambulance was spotted waiting just near the couple’s Windsor home.

Read more: Meghan Markle’s due date to give birth ‘revealed’ as today