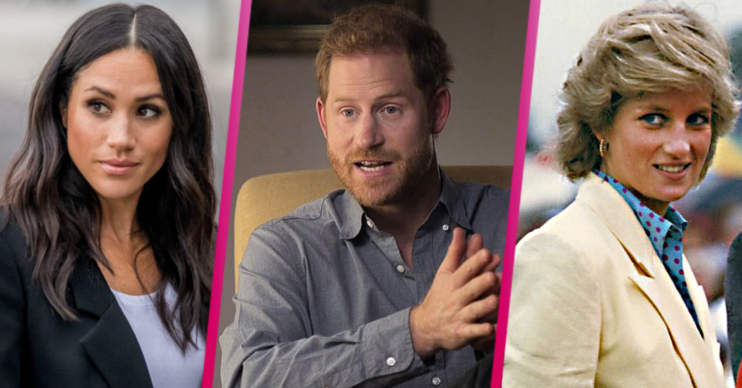 Harry and Meghan latest: Prince reveals the reason his wife didn’t follow through with taking her own life

Duke also admits he felt ashamed of his reaction

New Prince Harry and Meghan Markle revelations have come to light in his new Apple TV+ documentary, The Me You Can’t See.

In the series, Harry is seen undergoing therapy and being interviewed once more by Oprah Winfrey.

Harry also makes a series of new allegations about the royal family.

And he revealed that wife Meghan didn’t just want to kill herself, she also planned how to do it.

Harry and Meghan: What does the prince say in the new series?

One of the most worrying moments came when Harry spoke about Meghan’s suicide.

He said: “Meghan decided to share with me the suicidal thoughts and the practicalities of how she was going to end her life.”

However, he said she later decided against it because she didn’t want Harry to lose “another woman in my life”.

“She was completely sane. Yet at the quiet of night, these thoughts woke her up,” he said.

“The thing that stopped her from seeing it through was how unfair it would be on me after everything that had happened to my mum and to now be put in a position of losing another woman in my life — with a baby inside of her, our baby.”

Couple had to ‘pretend everything was okay’

Harry also said that he didn’t quite know how to handle her confession.

“I’m somewhat ashamed of the way that I dealt with them,” he confessed to Oprah.

“And of course, because of the system that we were in and the responsibilities and the duties that we had, we had a quick cuddle and then we had to get changed to jump in a convoy with a police escort and drive to the Royal Albert Hall for a charity event.

“Then step out into a wall of cameras and pretend as though everything’s okay.

“There wasn’t an option to say: ‘You know what, tonight, we’re not going to go.’ Because just imagine the stories that come from that.

They’re not going to stop until she dies. It’s incredibly triggering to potentially lose another woman in my life.

“Because to be honest with you, like a lot of other people my age could probably relate to, I know that I’m not going to get from my family what I need.

“I then had a son who I’d far rather be solely focused on, rather than every time I look into his eyes, wondering whether my wife is going to end up like my mother and I’m going to have to look after him myself,” he concluded.

Harry and Meghan: ‘They won’t stop until she dies’

Harry also said he fears history will repeat itself and he’ll lose Meghan in the same way that he lost his mother, Princess Diana.

“My mother was chased to her death while she was in a relationship with someone who wasn’t white. And now look what’s happened,” he said

“And it all comes back to the same people, the same business model, the same industry.

“They’re not going to stop until she dies. It’s incredibly triggering to potentially lose another woman in my life.”