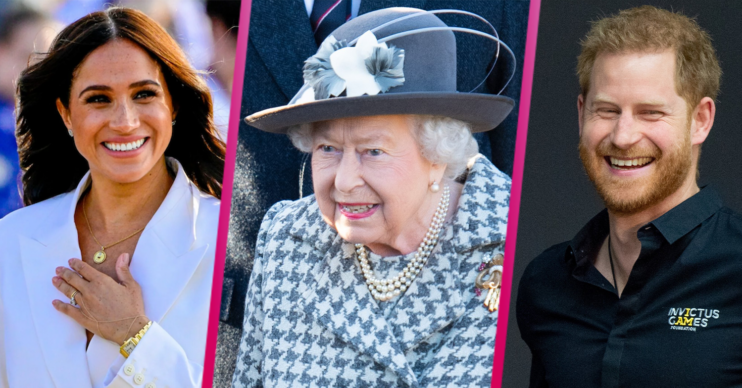 It's a 'leap of faith' for all involved

Prince Harry and Meghan Markle are said to have been asked to play a prominent role in the Queen‘s Platinum Jubilee celebrations this summer.

The monarch will celebrate 70 years on the throne over a long bank holiday weekend in June.

It’s been reported by the Telegraph that Harry and Meghan have been asked to attend the Queen’s Platinum Jubilee celebrations in London this June.

Read more: Prince Harry breaks his silence as he details visit to the Queen

They won’t take part in any events in an official capacity after stepping down as senior members of the royal family.

So this means they won’t take part in major events including Trooping the Colour.

However, it’s thought they will appear at several events that the Queen deems “family” events.

As a result, it’s reported that Harry and Meghan have been invited to join the royal family for the traditional Buckingham Palace appearance.

This will take place on June 2 and see the family gather to watch the RAF fly past.

They’ll also be able to attend a service of thanksgiving at St Paul’s Cathedral. This will be held in honour of the Queen’s 70 years on the throne.

One royal expert, Cameron Walker, said he thinks “it’s a sign” the Duke and Duchess of Sussex are starting to “make amends” with the family.

He told GB News: “We know that Prince Harry and Meghan met the Queen on Thursday. It’s been dubbed an olive branch meeting, trying to make amends.

The appearance on the balcony at Buckingham Palace is very much a family event.

“Similar to the service of thanksgiving we’re expecting at St Paul’s Cathedral on that Platinum Jubilee weekend in June.”

He added: “But I don’t think we’d expect to see Prince Harry and Meghan at things like Trooping the Colour. That is very much public and attended by senior working members of the royal family.

“We don’t have any confirmation on this. But I think it’s a sign that the royal family and the Duke and Duchess of Sussex are perhaps starting to make amends.”

Attendance would ‘mean a lot’ to the Queen

However, the invitation is now said to be in the laps of the Duke and Duchess of Sussex.

Following their visit to the Queen last week, it’s said that if they do take up the invitation, it would “mean a lot” to the monarch.

The Telegraph added it would involve “a leap of faith” from both parties amid ongoing tensions.