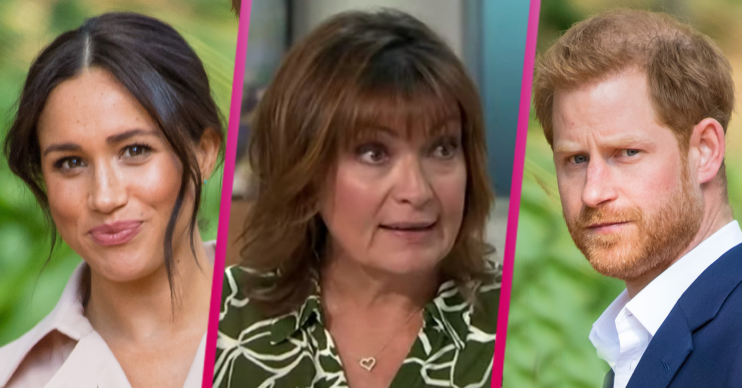 Lorraine Kelly has said the royal family should take a “long hard look at themselves”. Her comments come following the bombshell claims in the Harry and Meghan interview.

The Duke and Duchess of Sussex levelled claims of racism at the royal family in their Oprah interview earlier this week.

They claimed “concerns” were raised over the colour of Archie’s skin.

Writing in her column in The Sun, Lorraine stated that the royal family need to take a “long hard look at themselves”.

What did Lorraine say about Meghan and Harry?

Lorraine spoke about the palace statement that said they were concerned about the issue of race.

However, she added that it came with a “caveat” that their recollections varied from those of Meghan and Harry.

Read more: The Queen is seen for the first time since Meghan and Harry interview

Lorraine said: “After a Palace statement saying the royal family were concerned about the issue of race – with the caveat their recollections varied from those of Harry and Meghan – it seems they will tough this out and hope the story fizzles away.”

They will not be able to brush aside claims of racism easily, and do need to take a long, hard look at themselves.

However, she added: “They will not be able to brush aside claims of racism easily, and do need to take a long, hard look at themselves – but also the courtiers who speak on their behalf.”

So who else has spoken out about the interview?

Lorraine is by no means the only star to have spoken about the interview.

Piers Morgan “lost his job” at Good Morning Britain after he apparently “refused” to apologise to Meghan for his comments.

Read more: Piers Morgan to ‘continue to work for ITV’ after quitting GMB

And Ukrika Jonsson has today taken aim at Prince Harry, accusing him of using the grandchildren as “collateral damage” in the fall out.

She said: “It seems wholly unnecessary to make the grandchildren part of the collateral damage.”