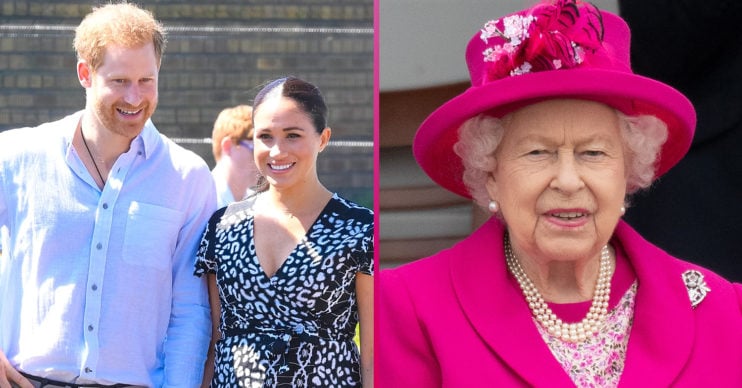 Harry and Meghan interview: Queen ‘to reach out to couple for peace talks’

The interview aired in the UK on Monday

Prince Harry and Meghan Markle’s Oprah interview made some explosive claims and revelations.

Now, the Queen will reportedly reach out to the Duke and Duchess of Sussex for “peace talks”.

According to reports, Her Majesty, 94, wants to take control of the fallout from the chat and has issued a “three-line whip” to stop Palace aides from publicly discussing the situation.

The Royal Family is under fire after millions of viewers watched the interview, which saw allegations of racism against the royals.

The Daily Mail reports the Queen wants to address the interview personally with her grandson and his wife.

A source told the publication: “It is difficult to underestimate how shell-shocked everyone is by what has happened.

“People are literally reeling from what has happened and some staff would dearly love to publicly rebut some of what has been said about them.

“But the Queen has taken a very measured, sensible approach. She is leading by example. This is a matter for her and the family to deal with.”

The interview, which aired on Monday night in the UK, saw Meghan and Harry speak about the last few years as working royals.

One of the bombshell claims came from the Duchess of Sussex when she alleged there were ‘concerns and conversations’ about how dark Archie’s skin colour might be when he was born within the royal family.

What happened during the interview?

Meanwhile, Meghan and Harry refused to identify the person who allegedly made the comment.

Oprah later confirmed Harry told her it wasn’t the Queen nor the Duke of Edinburgh, 99.

During the chat, Meghan also said she felt suicidal during her pregnancy with son Archie.

However, she claimed she asked someone at the Palace for help and she was told it “wouldn’t be good for The Institution”.

Elsewhere, Harry claimed his family didn’t speak out in support of Meghan following racism she received in the media.

He said: “No-one from my family ever said anything over those three years. That hurts.”

Harry also said he felt “let down” by his father Prince Charles, who he said stopped taking his calls after he and Meghan left the UK.

Meanwhile, the Palace recently issued a statement on the interview.

It read: “The issues raised, particularly that of race, are concerning.”

Did you watch the interview? Leave us a comment on our Facebook page @EntertainmentDailyFix and let us know.