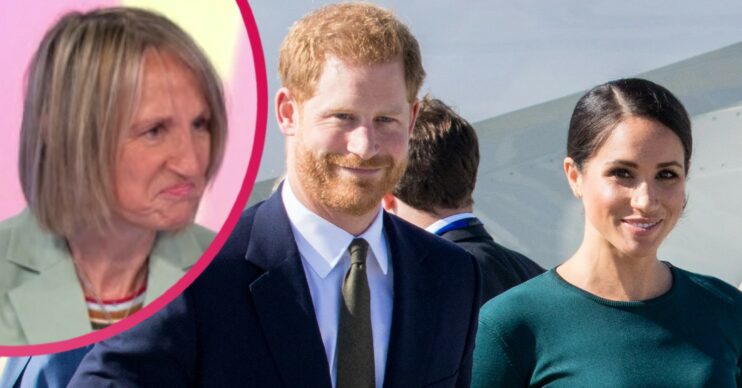 The Sussexes have named their daughter Lilibet Diana

Prince Harry and Meghan Markle were criticised on Loose Women today, as the panel discussed their baby daughter’s name.

The Duke and Duchess of Sussex welcomed Lilibet Diana – aka Lili – into the world last week.

However, the sentimental name hasn’t sat well with some on the ITV show.

Harry and Meghan baby name: What did the Loose Women panel say?

Jane Moore, 59, sighed: “Well, when anyone has a baby it’s lovely, isn’t it? But I don’t know, I just… Diana I get, I think that would have been really nice.

Furthermore, she added: “Lilibet was very much a nickname, the Queen couldn’t say her name when she was a kid and her dad King George V called her Lilibet because that was how it sounded.

“Prince Philip took it up as an affectionate thing between the two of them.

“I suppose it gives the link to the Queen, but three weeks ago, Harry was almost criticising his father’s parenting skills and saying that’s how he was parented.”

Jane continued: “Maybe I’m just a cynical old bag, yes probably. I just feel, either call her Lily or call her Lilibet, it’s something and nothing for me.”

The star shared: “I want to believe this is a really sentimental, even a token of an apology, or whatever we have done and said in the past few weeks, we still love you so we are going to give you this name.

“But to me it I can’t leave it, I don’t know why I feel like everything they do is for some other reason.”

However, viewers of the show were quick to defend the Duke and Duchess.

One wrote on Twitter: “Jane and Carol are so miserable talking about Harry and Meghan naming their child Lilibet Diana ‘as an apology’ or for an ‘ulterior motive.’ Maybe you can disagree with some parts of your family, and still love them and want to honour them.”

Jane and Carol are so miserable talking about Harry and Meghan naming their child Lilibet Diana "as an apology" or for an "ulterior motive." Maybe you can disagree with some parts of your family, and still love them and want to honour them. #LooseWomen

Harry and Meghan haven't done anything wrong, it's lovely they have a beautiful healthy baby, Ffs Carol & Jane get a life #LOOSEWOMEN

Isn’t it about time that the 2 miseries on Loose Women (Carol and Jane) were put out to pasture? What gives them the right to get all judgemental over a new baby’s name, one that pays tribute to Grandmother and Great Grandmother? One that has ZERO to do with them! #LooseWomen

A second said: “It’s up to Harry and Meghan what they call their daughter. It’s a lovely tribute to Harry’s grandmother and mother. If #loosewomen don’t like it, tough.”

In addition, a third tweeted: “Here we go, time for Jane Moore to bash Harry and Meghan again…”

Another added: “Harry and Meghan haven’t done anything wrong, it’s lovely they have a beautiful healthy baby, Carol & Jane get a life.”

Jane and Carol are so miserable talking about Harry and Meghan

A fifth complained: “Omg even Meghan & Harry do wrong by picking a name for their OWN child ffs #LooseWomen.”

Meanwhile, another appeared to agree with the pair.

They shared: “I agree with Carol – Harry and Meghan = boring! #loosewomen.”

What is the meaning behind Lilibet?

A statement confirmed the couple welcomed their daughter on June 4 and Meghan and Lili are “settling in at home”.

Furthermore, the statement also revealed the meaning behind Lili’s name.

It read: “Lili is named after her great-grandmother, Her Majesty The Queen, whose family nickname is Lilibet. Her middle name, Diana, was chosen to honor her beloved late grandmother, The Princess of Wales.”

In addition, Harry and Meghan issued a personal message to say their daughter is “more than we could have ever imagined”.