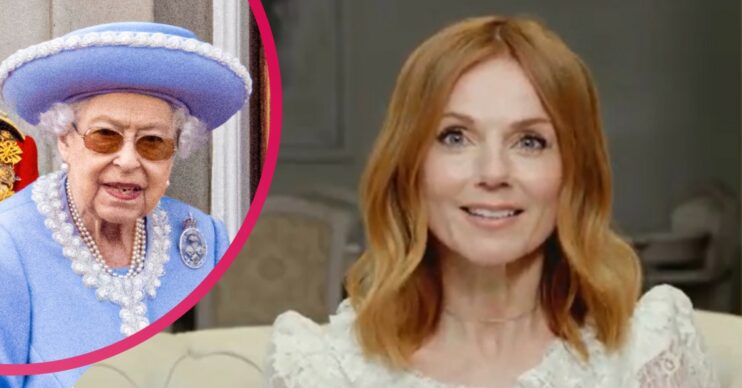 Geri Horner sent the Queen a message at the Platinum Party at the Palace concert over the weekend but viewers were left cringing.

The Spice Girl was one of a host of celebrities who recorded messages of support and thanks to the Monarch on her Platinum Jubilee.

They were broadcast to crowds at the event outside Buckingham Palace on Saturday night.

Wearing a white lace top, Geri, 49, looked wide-eyed as she spoke to the Queen through the camera.

She said: “Our Queen. Kind. Loving. Strong. Serving our country, the Commonwealth, uniting us all together.

“Always putting others before yourself. You’re truly inspirational, inside and out, we thank you… we love you.”

However, her message was immediately mocked by viewers watching at home.

One said on Twitter: “Geri Halliwell sounded like she was speaking to her cult leader. And why does she always wear white?”

Party at the Palace on BBC

A second said: “Dear God. Geri Halliwell has already forced me to put Netflix on and it hasn’t even started yet.”

A third said: “Lord, Geri Horner, that was a bit intense.”

Meanwhile, another wrote: “Geri Halliwell trying to be sincere about the Queen. PS my toes are still cringing.”

But Geri wasn’t the only celebrity paying tribute to the Queen’s 70 year reign.

And the Queen got in on the act herself in a sketch with Paddington Bear.

She hosted the popular character at the Palace for tea.

But after Paddington caused chaos, he offered Her Majesty a marmalade sandwich – and she revealed that she had one already in her famous handbag.

They then began tapping their spoons on their teacups to the sound of We Will Rock You by Queen.

The band then appeared on stage outside to kick off the night’s performances.