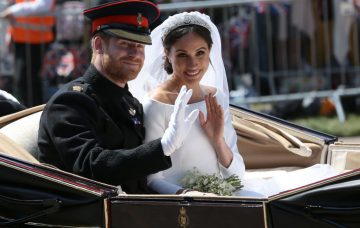 Prince Harry’s ex girlfriend, Cressida Bonas, has admitted to fretting in the lead up to the royal wedding, which she attended last weekend.

But far from worrying about watching the man she once dated get hitched, it was the age-old question of ‘what to wear?’ that bothered Cressida, 29, the most!

In her column for The Spectator, the actress admitted that she found the dress code for the nuptials at Windsor Castle ‘tricky’, because they required her to wear a hat.

“Friends are starting to get married. Which means the dilemma of British wedding attire. Hats. Why do I find hats so tricky? Tricky to wear, tricky to look at, and extremely tricky for the poor soul sitting in the pew behind,” she wrote.

“Most of the time I avoid headgear. This can prompt disapproving looks from the older generations. Last weekend I attended the royal wedding. The invitation clearly stated that guests should wear hats. Yikes.

“I opted for a minimal feather number. I can only hope I got it right.”

Luckily, Cressida looked effortlessly stylish on the day, in a boho-style pink and green striped dress and a pink feathered head band.

Unfortunately Prince Harry’s other ex-girlfriend, Chelsy Davy, didn’t escape as unscathed, as her apparently distraught facial expression as she waited gloomily in the pews was caught on several cameras.

The couple split just before Cressida was due to accompany Harry to the US for his close friend Guy Pelly’s wedding in 2014.

Cressida is rumoured to have ‘freaked out’ about being placed at the top table with Harry.

Other sources say she couldn’t handle his partying at the time, and despite her career as an actress, preferred to stay out of the limelight as much as possible.

Read more: Duchess of Sussex receives her own Coat of Arms

Harry had only been dating his new bride Meghan since late 2016, but insiders say he felt an ‘immediate spark’ with the Suits actress that he had never felt before.

Do you think Cressida pulled off her royal wedding look? Leave us a comment on our Facebook page @EntertainmentDailyFix and let us know what you think!