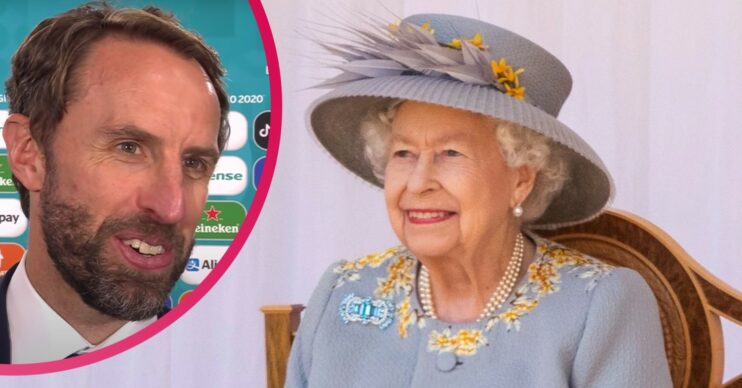 Can you spot it?

In the latest Euro 2020 final news, some social media users reckon the Queen has “hidden a secret message” in her letter of support to England.

It emerged yesterday (July 10) that the monarch has sent her best wishes to football manager Gareth Southgate ahead of England’s final with Italy.

But some japesters have joked there is a coded message within the Queen’s message… and it has tickled many observers on Twitter.

The Queen praised the England squad for their “spirit, commitment, and pride” in her note.

She also referenced England’s 1966 World Cup win by mentioning how she was “fortunate” to award the trophy at that tournament.

The letter, addressed to Gareth Southgate, added the royal family all sent their congratulations for the team’s success so far.

But some Twitter types believe the Three Lions spirit may also have captured the Queen’s imagination too.

What the Queen may have written

They have suggested the memorable line most associated with the comics’ tune can be found in the Queen’s note.

And many others have replicated the same joke, claiming “it’s coming home” can be found many times in the same letter.

How fans have reacted

Nearly everyone that has responded to the joke on Twitter seems to have got it. But not everyone apparently understood the gag first time around.

“Wow, you got lucky with those letters,” tweeted one person.

And someone else responded: “That was not intentional, no way.”

The majority of social media users rolled with the joke, however.

And many went on to suggest their own daft additions to the mild wind up, too.

Another joked: “I think you’ll find out who shot JFK and where Shergar is as well in there too!”

And yet another person laughed: “This is why I’m on Twitter.”

England play Italy in the Euro 2020 final this evening (Sunday July 11). Kick off is at 8pm and coverage will air on both BBC One and ITV.