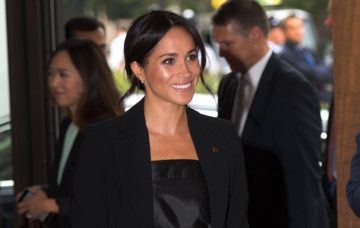 She's been making secret visits to the London kitchen since January

The Duchess of Sussex is supporting a charity cookbook for Grenfell fire survivors in her first solo project since joining the royal family.

Former actress Meghan, 37, has written the foreword for ‘Together: Our Community Cookbook’ after making secret visits to the Hubb Community Kitchen in London since January.

The cookbook contains more than 50 recipes from local women living within the Grenfell community.

"The Hubb Community Kitchen is a place for women to laugh, grieve, cry and cook together. Melding cultural identities under a shared roof, it creates a space to feel a sense of normalcy – in its simplest form, the universal need to connect, nurture, and commune through food, through crisis or joy – something we can all relate to." The Duchess of Sussex is supporting a new charity cookbook, which celebrates the power of cooking to bring people together – visit the link in our bio or our IGTV channel to watch the full film #CookTogether

Meghan said: “In January 2018 as I was settling into my new home of London, I met a group of women whose community had been affected by the Grenfell fire. They had decided to get together to cook fresh food for their families and neighbours.

“I immediately felt connected to this community kitchen. Like these women, I’m passionate about food and cooking as a way to strengthen communities.”

Read more: Duchess of Sussex’s wedding dress and veil to go on display

The Duchess of Sussex is supporting a new charity cookbook, which celebrates the power of cooking to bring people together – visit the link in our bio or our #IGTV channel to watch the full film. #CookTogether ‘Together: Our Community Cookbook’ showcases over 50 recipes from women whose community was affected by the Grenfell Tower fire. The proceeds from the book will support the Hubb Community Kitchen, enabling it to stay open and to thrive.

The women were meeting for two days each week to provide food for survivors of the Grenfell fire in June 2017, making meals for people to take back to their hotels and temporary accommodation.

They could only meet for two days a week because there wasn’t enough funding available for seven days, which led Meghan to suggest they release a cookbook which she would support to enable the kitchen to open for longer.

Meghan has continued to make private visits to the kitchen since her first outing there in January.

A spokesperson for the royal, who married Prince Harry in May, said: “United by their passion for cooking as a way of strengthening communities, The Duchess was inspired by how the project empowers women at a grassroots level, and championed the cookbook project as a way of ensuring the kitchen can continue transforming lives and communities through cooking.”

Profits from the sales of ‘Together’ will support the Hubb Community Kitchen, helping to keep it open for up to seven days a week and to widen its reach to others in the community.

The cookbook will be published by Penguin Random House companies and is supported by The Royal Foundation.

It goes on sale this week.

The Duchess of Sussex has often spoken about her passion for food and cooking, dedicating multiple posts on her now-defunct blog The Tig to her culinary love.

She previously revealed how her character in Suits, lawyer Rachel Zane, was given a love of cooking and food to reflect Meghan’s real-life hobbies.

“I love to cook. My character is a foodie because they know that I’m a foodie,” she told Marie Claire.

“I’m always on the quest to find amazing new restaurants and new recipes. I’m a California girl, right? I grew up with that farm-to-table dining before it was sweeping the nation. I do think there’s some value to really throwing yourself into food and embracing where it comes from.”

Do you enjoy cooking? Will you buy a copy of this cookbook? Leave us a comment on our Facebook page @EntertainmentDailyFix and let us know.